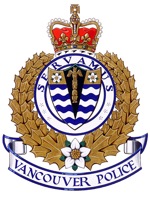 from Middle French policier, from police conduct of public affairs First attested in English c.1530, the word police comes from Middle French police, in turn from Latin politia, which is the romanization of the Greek "πολιτεία" (politeia), "citizenship, administration, civil polity" and that from "πόλις" (polis), "city". In ancient Greece the term "πολισσόος" (polissoos), referred to a person who was "guarding a city". This term comes from polis + "σῴζω" (sozo), "save, keep".

b : to exercise such supervision over the policies and activities of

The police are persons empowered to enforce the law, protect property and reduce civil disorder. Their powers include the legitimized use of force. The term is most commonly associated with police services of a state that are authorized to exercise the police power of that state within a defined legal or territorial area of responsibility. Police forces are often defined as organizations separate from any military forces, or other organizations involved in the defense of the state against foreign agressors; however, gendarmerie and military police are military units charged with policing.

Law enforcement, however, constitutes only part of policing activity. Policing has included an array of activities in different situations, but the predominant ones are concerned with the preservation of order. In some societies, in the late 18th century and early 19th century, these developed within the context of maintaining the class system and the protection of private property.

Alternative names for police force include constabulary, gendarmerie, police department, police service, crime prevention, protective services, law enforcement agency, civil guard or civic guard. Members can be police officers, troopers, sheriffs, constables, rangers, peace officers or civic/civil guards. Russian police and police of the Soviet-era Eastern Europe are (or were) called militsiya. The Irish police are called the Garda Síochána ("guardians of the peace"); a police officer is called a garda. As police are often in conflict with individuals, slang terms are numerous. Many slang terms for police officers are decades or centuries old with lost etymology.[1]