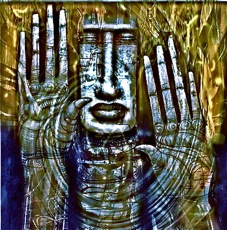 In Vedantic philosophy, it is the notion of a vital, life-sustaining force of living beings and vital energy, comparable to the Chinese notion of Qi. Prana is a central concept in Ayurveda and Yoga where it is believed to flow through a network of fine subtle channels called nadis. The Pranamaya-kosha is one of the five Koshas or "sheaths" of the Atman

Prana was first expounded in the Upanishads, where it is part of the worldly, physical realm, sustaining the body and the mother of thought and thus also of the mind. Prana suffuses all living forms but is not itself the Atman or individual soul. In the Ayurveda, the Sun and sunshine are held to be a source of Prana.

In Yoga, the three main channels of prana are the Ida, the Pingala and the Sushumna. Ida relates to the left side of the body, terminating at the left nostril and pingala to the right side of the body, terminating at the right nostril. In some practices, alternate nostril breathing balances the prana that flows within the body. When prana enters a period of uplifted, intensified activity, the Yogic tradition refers to it as Pranotthana.

In Ayurveda, the Prana is further classified into subcategories, referred to as pranas. According to Hindu philosophy these are the vital principles of basic energy and subtle faculties of an individual that sustain physiological processes. There are five pranas or vital currents in the Hindu system:

Pranayama is the practice in which the control of prana is achieved (initially) from the control of one's breathing. According to Yogic philosophy the breath, or air, is merely a gateway to the world of prana and its manifestation in the body. In yoga, pranayama techniques are used to control the movement of these vital energies within the body, which is said to lead to an increase in vitality in the practitioner. The practice of these techniques is not trivial, and Kason (2000) mentions circumstances where pranayama techniques might disrupt the balance of a person's life.