From Nordan Symposia
(Redirected from Seasonal)
Jump to navigationJump to search 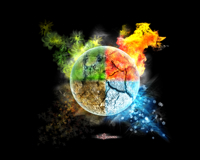 b : a suitable or natural time or occasion <when my season comes to sit on David's throne — John Milton>
c : an indefinite period of time : while <sent home again to her father for a season — Francis Hackett>

b : one of the four quarters into which the year is commonly divided
c : the time of a major holiday

For lessons on the related topic of Cycles, follow this link.

A season is a division of the year, marked by changes in weather, ecology, and hours of daylight.

Seasons result from the yearly revolution of the Earth around the Sun and the tilt of the Earth's axis relative to the plane of revolution. In temperate and polar regions, the seasons are marked by changes in the intensity of sunlight that reaches the Earth's surface, variations of which may cause animals to go into hibernation or to migrate, and plants to be dormant.

In some tropical and subtropical regions it is more common to speak of the rainy (or wet, or monsoon) season versus the dry season, because the amount of precipitation may vary more dramatically than the average temperature. For example, in Nicaragua, the dry season is called Summer (Oct to May) and the rainy season is called Winter (Apr to Nov) even though it is located in the northern hemisphere.

In other tropical areas a three-way division into hot, rainy and cool season is used.

In some parts of the world, special "seasons" are loosely defined based upon important events such as a hurricane season, tornado season or a wildfire season.

Chinese seasons are traditionally based on 24 periods known as solar terms, and begin at the midpoint of solstices and equinoxes.[1]