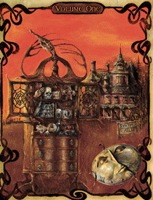 The term is derived from the Latin word secernere, "to distinguish" or "to set apart," the passive participle (secretum) meaning "having been set apart," with the eventual connotation of something private or confidential. A secretarius was a person, therefore, overseeing business confidentially, usually for a powerful individual (a king, pope, etc).

Since the Renaissance until the late 19th century, men involved in the daily correspondence and the activities of the mighty had assumed the title of secretary (or in other cases, "clerk").

With time, like many titles, the term was applied to more and varied functions, leading to compound titles to specify various secretarial work better, like general secretary, financial secretary or Secretary of state. Just "secretary" remained in use either as an abbreviation when clear in the context or for relatively modest positions such as administrative assistant of the officer(s) in charge, either individually or as member of a secretariat. As such less influential posts became more feminine and common with the multiplication of bureaucracies in the public and private sectors, new words were also coined to describe them, such as personal assistant.

b : an officer of an organization or society responsible for its records and correspondence

The executive secretary (sometimes called executive assistant, administrative assistant or associate) has a myriad of administrative duties. Traditionally, these duties were mostly related to correspondence, such as the typing out of letters. The advent of word processing has significantly reduced the time that such duties require, with the result that many new tasks have come under the purview of the secretary. These might include managing budgets and doing bookkeeping, maintaining websites, and making travel arrangements. Secretaries might manage all the administrative details of running a high level conference or arrange the catering for a typical lunch meeting. Often executives will ask their assistant to take meeting minutes and prepare meeting documents for review. They may also do personnel paperwork which used to be thought of as a Human Relations function; this might also include understanding the complex rules regarding Visa and Immigration.