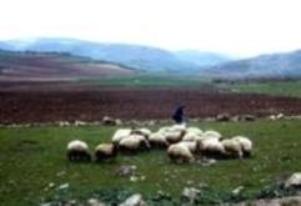 Shepherding is one of the oldest occupations, beginning some 6,000 years ago in Asia Minor. Sheep were kept for their milk, meat and especially their wool. Over the next millennia, sheep and shepherding spread throughout Eurasia.

Some sheep were integrated in the family farm along with other animals such as chickens and pigs. To maintain a large flock, however, the sheep must be able to move from pasture to pasture; this required the development of an occupation separate from that of the farmer. The duty of shepherds was to keep their flock intact and protect it from wolves and other predators. The shepherd was also to supervise the migration of the flock and ensured they made it to market areas in time for shearing. In ancient times shepherds also commonly milked their sheep, and made cheese from this milk; only some shepherds still do this today.

In many societies shepherds were an important part of the economy. Unlike farmers, shepherds were often wage earners, being paid to watch the sheep of others. Shepherds also lived apart from society, being largely nomadic. It was mainly a job of solitary males without children, and new shepherds thus needed to be recruited externally. Shepherds were most often the younger sons of farming peasants who did not inherit any land. Still in other societies, each family would have a family member to shepherd its flock, often a child, youth or an elder who couldn't help much with harder work; these shepherds were fully integrated in society.

Shepherds would normally work in groups either looking after one large flock, or each bringing their own and merging their responsibilities. They would live in small cabins, often shared with their sheep and would buy food from local communities. Less often shepherds lived in covered wagons that traveled with their flocks.

Shepherding developed only in certain areas. In the lowlands and river valleys, it was far more efficient to grow grain and cereals than to allow sheep to graze, thus the raising of sheep was confined to rugged and mountainous areas. In pre-modern times shepherding was thus centered on regions such as the Middle East, Greece, the Pyrenees, the Carpathian Mountains, and Scotland.

In modern times shepherding has changed dramatically. The abolition of common lands in Europe in the eighteenth and nineteenth century moved shepherding from independent nomads to employees of massive estates. Some families in Africa and Asia have their wealth in sheep, so a young son is sent out to guard them while the rest of the family tend to other chores. In the USA, many sheep herds are flocked over public BLM lands.

Wages are higher than was the case in the past. Keeping a shepherd in constant attendance can be costly. Also, the eradication of sheep predators in parts of the world have lessened the need for shepherds. In places like Britain, hardy breeds of sheep are frequently left alone without a shepherd for long periods of time. More productive breeds of sheep can be left in fields and moved periodically to fresh pasture when necessary. Hardier breeds of sheep can be left on hillsides. The sheep farmer will attend to the sheep when necessary at times like lambing or shearing.[1]