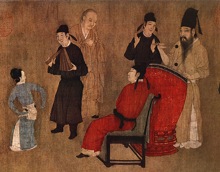 For lessons on the topic of Status, follow this link.

Status refers to the relative rank that an individual holds; this includes attendant rights, duties, and lifestyle, in a social hierarchy based upon honor or prestige. Status has two different types that come along with it: achieved, and ascribed. The word status refers to social stratification on a vertical scale.

In modern societies, occupation is usually thought of as the main determinant of status, but other memberships or affiliations (such as ethnic group, religion, gender, voluntary associations, fandom, hobby) can have an influence. The importance of social status can be seen in the peer status hierarchy of geeeks, athletes, cheerleaders, nerds, and weirdos in American high school]]s. [1]The Effect of Middle School Extra Curricular Activities on Adolescents' Popularity and Peer Status

Achieved status is when people are placed in the stratification structure based on their individual merits or achievements. This status can be achieved through education, occupation, and marital status. Their place within the stratification structure is determined by society's bar which often judges them on success, success being financial, academic, political and so on. People who achieve a high hierarchical social status often display the following qualities: confidence, generosity, intelligence, mental and emotional stability, and happiness.[2]ShaveMagazine.com America most commonly uses this form of status with jobs. The higher up your are in rank the better off you are and the more control you have over your co-workers.

In pre-modern societies, status differentiation is widely varied. In some cases it can be quite rigid and class based, such as with the Indian caste system. In other cases, status exists without class and/or informally, as is true with some Hunter-Gatherer societies such as the Khoisan, and some Indigenous Australian societies. In these cases, status is limited to specific personal relationships. For example, a Khoisan man is expected to take his wife's mother quite seriously (a non-joking relationship), although the mother-in-law has no special "status" over anyone except her son-in-law--and only then in specific contexts. All societies have a form of social status.

Status is an important idea in social stratification. Max Weber distinguishes status from social class, though some contemporary empirical sociologists add the two ideas to create Socioeconomic status or SES, usually operationalised as a simple index of income, education and occupational prestige.

Status inconsistency is a situation when an individual's social positions have both positive and negative influences on their social status. For example, a teacher has a positive societal image (respect, prestige) which increases his status but may earn little money, which simultaneously decreases his status. In contrast, a drug dealer, may have low social position though have a high income. However, a drug dealer may have high status within his or her own reference group (e.g., inner city gangs) and may be indifferent to his "low status" within the larger society. For example, a wealthy drug dealer who flaunts the proceeds of his trade may have the highest social status on the "street." Thus, "status inconsistency" applies to situations where members of the in-group judge the status of members of an out-group and may not apply to cases of status attainment on all criteria within an in-group. Economic status occurs when one’s position in the stratification structure is based on their economic status in the world. This is based on income, education, and occupation. Also you must take into consideration inherited wealth, savings, occupational benefits, and ownerships of homes or vehicles.

Statuses based on inborn characteristics, such as gender, are called "ascribed statuses", while statuses that individuals gained through their own efforts are called "achieved statuses". Specific behaviors are associated with social stigmas which can affect status.

Ascribed Status is when one’s position is inherited through family. Monarchy is a widely-recognized use of this method, to keep the rulers in one family. This usually occurs at birth without any reference as to how that person may turn out to be a good or bad leader.

Social mobility is especially prominent in the United States in recent years with an ever-increasing number of women entering into the workplace as well as a steady increase in the number of full-time college students. OLMIS - Women in the Labor ForceDigest of Education Statistics, 2007 - Introduction This increased education as well as the massive increase in multiple household incomes has greatly contributed to the rise in social mobility obtained by so many today. With this upward mobility; however, comes the philosophy of "Keeping up with the Joneses" that so many Americans obtain. Although this sounds good on the surface, it actually poses a problem because millions of Americans are in credit card debt due to conspicuous consumption and purchasing goods that they do not have the money to pay for.

Social stratification describes the way in which people are placed with society. It is associated with the ability of individuals to live up to some set of ideals or principles regarded as important by the society or some social group within it. The members of a social group interact mainly within their own group and to a lesser degree with those of higher or lower status.

Max Weber also developed the idea of status groups. Status groups are communities that are based on ideas of proper lifestyles and the honor given to people by others. These groups only exist because of people's ideas of prestige or dishonor. Also, people in these communities are only supposed to associate with people of like status, and all other people are looked at as inferiors.

The French sociologist Pierre Bourdieu developed theories of social stratification based on aesthetic taste in his work Distinction. Bourdieu claims that how one chooses to present one’s social space to the world, one’s aesthetic dispositions, depicts one’s status and distances oneself from lower groups. Specifically, Bourdieu hypothesizes that these dispositions are internalized at an early age and guide the young towards their appropriate social positions, towards the behaviors that are suitable for them, and an aversion towards other lifestyles.

Bourdieu theorizes that class fractions teach aesthetic preferences to their young. Class fractions are determined by a combination of the varying degrees of social, economic, and cultural capital. Society incorporates “symbolic goods, especially those regarded as the attributes of excellence, […as] the ideal weapon in strategies of distinction” (Bourdieu 66). Those attributes deemed excellent are shaped by the interests of the dominating class. He emphasizes the dominance of cultural capital early on by stating that “differences in cultural capital mark the differences between the classes” (Bourdieu 69). Aesthetic dispositions are the result of social origin rather than accumulated capital and experience over time. The acquisition of cultural capital depends heavily on “total, early, imperceptible learning, performed within the family from the earliest days of life” (Bourdieu 66). Bourdieu hypothetically guarantees that the opinions of the young are those that they are born into, the accepted “definitions that their elders offer them” (Bourdieu 477).

He asserts the primacy of social origin and cultural capital by claiming that social capital and economic capital, though acquired cumulatively over time, depend upon it. Bourdieu claims that “one has to take account of all the characteristics of social condition which are (statistically) associated from earliest childhood with possession of high or low income and which tend to shape tastes adjusted to these conditions” (Bourdieu 177).

According to Bourdieu, tastes in food, culture and presentation, are indicators of class, because trends in their consumption seemingly correlate with an individual’s fit in society (Bourdieu 184). Each fraction of the dominant class develops its own aesthetic criteria. A multitude of consumer interests based on differing social positions necessitates that each fraction “has its own artists and philosophers, newspapers and critics, just as it has its hairdresser, interior decorator or tailor” (Bourdieu 231-32).

Bourdieu does not wholly disregard the importance of social capital and economic capital in the formation of cultural capital. In fact, the production of art and the ability to play an instrument “presuppose not only dispositions associated with long establishment in the world of art and culture but also economic means…and spare time” (Bourdieu 75). However, regardless of one’s ability to act upon one’s preferences, Bourdieu specifies that “respondents are only required to express a status-induced familiarity with legitimate…culture” (Bourdieu 63).

“[Taste] functions as a sort of social orientation, a ‘sense of one’s place’, guiding the occupants of a given…social space towards the social positions adjusted to their properties, and towards the practices or goods which befit the occupants of that position” (Bourdieu 466). Thus, different modes of acquisition yield differences in the nature of preferences (Bourdieu 65).

These “cognitive structures…are internalized, ‘embodied’ social structures”, becoming a natural entity to the individual (Bourdieu 468). Different tastes are thus seen as unnatural and rejected, resulting in “disgust provoked by horror or visceral intolerance (‘sick-making’) of the tastes of others” (Bourdieu 56).

Bourdieu himself believes class distinction and preferences are “most marked in the ordinary choices of everyday existence, such as furniture, clothing or cooking, which are particularly revealing of deep-rooted and long-standing dispositions because, lying outside the scope of the educational system, they have to be confronted, as it were, by naked taste” (Bourdieu 77). Indeed, Bordieu believes that “the strongest and most indelible mark of infant learning” would probably be in the tastes of food (Bourdieu 79). Bourdieu thinks that meals served on special occasions are “an interesting indicator of the mode of self-presentation adopted in ‘showing off’ a life-style (in which furniture also plays a part)” (Bourdieu 79). The idea is that their likes and dislikes should mirror those of their class fractions.

Children from the lower end of the social hierarchy are predicted to choose “heavy, fatty fattening foods, which are also cheap” in their dinner layouts, opting for “plentiful and good” meals as opposed to foods that are “original and exotic” (Bourdieu 177, 79). These potential outcomes would reinforce Bourdieu’s “ethic of sobriety for the sake of slimness, which is most recognized at the highest levels of the social hierarchy,” that contrasts the “convivial indulgence” characteristic of the lower classes (Bourdieu 179). Demonstrations of the tastes of luxury (or freedom) and the tastes of necessity reveal a distinction among the social classes.

The degree to which social origin affects these preferences surpasses both educational and economic capital. In fact, at equivalent levels of educational capital, social origin remains an influential factor in determining these dispositions (Bourdieu 63). How one describes one’s social environment relates closely to social origin because the instinctive narrative springs from early stages of development (Bourdieu 78). Also, across the divisions of labor “economic constraints tend to relax without any fundamental change in the pattern of spending” (Bourdieu 185). This observation reinforces the idea that social origin, more than economic capital, produces aesthetic preferences because regardless of economic capability consumption patterns remain stable.