From Nordan Symposia
(Redirected from Soulmate)
Jump to navigationJump to search 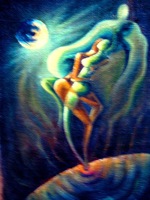 A soulmate (or soul mate) is a person with whom one has a feeling of deep or natural affinity, similarity, love, intimacy, sexuality, spirituality, or compatibility. A related concept is that of the twin flame or twin soul, which is thought to be the ultimate soulmate. In New Age spirituality, the ultimate soulmate is the one and only other half of one's soul. However, not everyone who uses these terms intends them to carry such mystical connotations.

Aristophanes presented a story about soulmates in The Symposium by Plato. It states that humans originally consisted of four arms, four legs, and a single head made of two faces, but Zeus feared their power and split them all in half, condemning them to spend their lives searching for the other half to complete them.

According to Theosophy, whose claims were modified by Edgar Cayce, God created androgynous souls—equally male and female. Later theories postulate that the souls split into separate genders, perhaps because they incurred karma while playing around on the Earth, or "separation from God." Over a number of reincarnations, each half seeks the other. When all karmic debt is purged, the two will fuse back together and return to the ultimate.

Bashert, (Yiddish: באַשערט), is a Yiddish word that means "destiny". It is often used in the context of one's divinely foreordained spouse or soulmate, who is called "basherte" (female) or "basherter" (male). It can also be used to express the seeming fate or destiny of an auspicious or important event, friendship, or happening.[1]