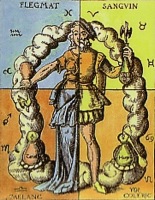 Middle English, from Latin temperamentum, from temperare to mix, temper

For lessons on the topic of Temperament, follow this link.

In psychology, temperament refers to those aspects of an individual's personality, such as introversion or extroversion, that are often regarded as innate rather than learned. A great many classificatory schemes for temperament have been developed; none, though, has achieved general consensus.

Historically, the concept of temperament was part of the theory of the four humours, with their corresponding four temperaments. The concept played an important part in pre-modern psychology, and was explored by philosophers such as Immanuel Kant and Hermann Lotze. David W. Keirsey also drew upon the early models of temperament when developing the Keirsey Temperament Sorter. More recently, scientists seeking evidence of a biological basis of personality have further examined the relationship between temperament and character (defined in this context as the learnt aspects of personality). However, biological correlations have proven hard to confirm.

Temperament is determined through specific behavioral profiles, usually focusing on those that are both easily measurable and testable early in childhood. Commonly tested factors include irritability, activity, frequency of smiling, and an approach or avoidant posture to unfamiliar events. There is generally a low correlation between descriptions by teachers and behavioural observations by scientists of features used in determining temperament. Temperament is hypothesized to be associated with biological factors, but these have proven difficult to test directly.