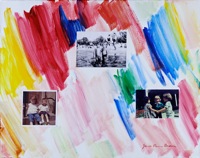 Childhood (being a child) is a broad term usually applied to the phase of development in humans between infancy and adulthood.

Age definition of a child

In many countries there is an age of majority when childhood ends and a person legally becomes an adult. The age can range anywhere from 13 to 21, with 18 being the most common.

Philippe Ariès, an important French medievalist and historian, published a study in 1961 of paintings, gravestones, furniture, and school records. He found that before the seventeenth century, children were represented as mini-adults. Since then historians have increasingly researched childhood in past times. Before Ariès, George Boas had published The Cult of Childhood.

For lessons on the topic of Childhood, follow this link.

During the Renaissance, artistic depictions of children increased dramatically in Europe. This did not impact the social attitude to children much, however.

The Victorian Era has been described as a source of the modern institution of childhood. Ironically, the Industrial Revolution during this era led to an increase in child labour, but due to the campaigning of the Evangelicals, and efforts of author Charles Dickens and others, child labour was gradually reduced and halted in England via the Factory Acts of 1802-1878. The Victorians concomitantly emphasized the role of the family and the sanctity of the child, and broadly speaking, this attitude has remained dominant in Western societies since then.

In the contemporary era Joe L. Kincheloe and Shirley R. Steinberg have constructed a critical theory of childhood and childhood education that they have labeled kinderculture. Kincheloe and Steinberg make use of multiple research and theoretical discourses (the bricolage) to study childhood from diverse perspectives—historiography, ethnography, cognitive research, media studies, cultural studies, political economic analysis, hermeneutics, semiotics, content analysis, etc. Based on this multiperspectival inquiry, Kincheloe and Steinberg contend that new times have ushered in a new era of childhood. Evidence of this dramatic cultural change is omnipresent, but many individuals in the late twentieth and early twenty-first centuries have not yet noticed it. When Steinberg and Kincheloe wrote the first edition of Kinderculture: The Corporate Construction of Childhood in 1997 (second edition, 2004) many people who made their living studying, teaching, or caring for children were not yet aware of the nature of the changes in childhood that they encountered daily.

In the domains of psychology, education, and to a lesser degree sociology and cultural studies few observers before kinderculture had studied the ways that the information explosion so characteristic of our contemporary era (hyperreality) had operated to undermine traditional notions of childhood and change the terrain of childhood education. Those who have shaped, directed and employed contemporary information technology have played an exaggerated role in the reformulation of childhood. Of course, information technology alone, Kincheloe and Steinberg maintain, has not produced a new era of childhood. Obviously, numerous social, cultural, and political economic factors have operated to produce such changes. The central purpose of kinderculture is to socially, culturally, politically, and economically situate the changing historical status of childhood and to specifically interroge the ways diverse media have helped construct what Kincheloe and Steinberg call "the new childhood." Kinderculture understands that childhood is an ever-changing social and historical artifact—not simply a biological entity. Because many psychologists have argued that childhood is a natural phase of growing up, of becoming an adult, Kincheloe and Steinberg coming from an educational context saw kinderculture as a corrective to such a "psychologization" of childhood.