From Nordan Symposia
(Redirected from Taxonomic)
Jump to navigationJump to search 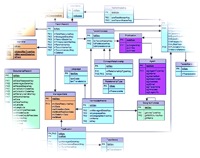 Taxonomy is the practice and science of classification. The word finds its roots in the Greek τάξις, taxis (meaning 'order', 'arrangement') and νόμος, nomos ('law' or 'science'). Taxonomy uses taxonomic units, known as taxa (singular taxon).

In addition, the word is also used as a count noun: a taxonomy, or taxonomic scheme, is a particular classification ("the taxonomy of ..."), arranged in a hierarchical structure. Typically this is organized by supertype-subtype relationships, also called generalization-specialization relationships, or less formally, parent-child relationships. In such an inheritance relationship, the subtype by definition has the same properties, behaviors, and constraints as the supertype plus one or more additional properties, behaviors, or constraints. For example, car is a subtype of vehicle. So any car is also a vehicle, but not every vehicle is a car. Therefore, a type needs to satisfy more constraints to be a car than to be a vehicle.

In an even wider sense, the term taxonomy could also be applied to relationship schemes other than parent-child hierarchies, such as network structures with other types of relationships. Taxonomies may then include single children with multi-parents, for example, "Car" might appear with both parents "Vehicle" and "Steel Mechanisms"; to some however, this merely means that 'car' is a part of several different taxonomies.[2] A taxonomy might also be a simple organization of kinds of things into groups, or even an alphabetical list. However, the term vocabulary is more appropriate for such a list. In current usage within Knowledge Management, taxonomies are considered narrower than ontologies since ontologies apply a larger variety of relation types.[3]

Mathematically, a hierarchical taxonomy is a tree structure of classifications for a given set of objects. It is also named Containment hierarchy. At the top of this structure is a single classification, the root node, that applies to all objects. Nodes below this root are more specific classifications that apply to subsets of the total set of classified objects. The progress of reasoning proceeds from the general to the more specific. In scientific taxonomies, a conflative term is always a polyseme.[4]

In contrast, in a context of legal terminology, an open-ended contextual taxonomy—a taxonomy holding only with respect to a specific context. In scenarios taken from the legal domain, a formal account of the open-texture of legal terms is modeled, which suggests varying notions of the "core" and "penumbra" of the meanings of a concept. The progress of reasoning proceeds from the specific to the more general.[5][1]