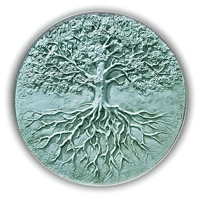 The concept of a tree of life as a many-branched tree illustrating the idea that all life on earth is related has been used in science, religion, philosophy, mythology, and other areas. A tree of life is variously;

For lessons on the topic of the Tree of Life, follow this link.

The " tree of the knowledge of good and evil " may be a figure of speech, a symbolic designation covering a multitude of human experiences, but the "tree of life" was not a myth; it was real and for a long time was present on Urantia. When the Most Highs of Edentia approved the commission of Caligastia as Planetary Prince of Urantia and those of the one hundred Jerusem citizens as his administrative staff, they sent to the planet, by the Melchizedeks, a shrub of Edentia, and this plant grew to be the tree of life on Urantia. This form of nonintelligent life is native to the constellation headquarters spheres, being also found on the headquarters worlds of the local and superuniverses as well as on the Havona spheres, but not on the system capitals.

This superplant stored up certain space-energies which were antidotal to the age-producing elements of animal existence. The fruit of the tree of life was like a superchemical storage battery, mysteriously releasing the life-extension force of the universe when eaten. This form of sustenance was wholly useless to the ordinary evolutionary beings on Urantia, but specifically it was serviceable to the one hundred materialized members of Caligastia's staff and to the one hundred modified Andonites who had contributed of theirlife plasm to the Prince's staff, and who, in return, were made possessors of that complement of life which made it possible for them to utilize the fruit of the tree of life for an indefinite extension of their otherwise mortal existence.[2]