From Nordan Symposia
(Redirected from Weaning)
Jump to navigationJump to search 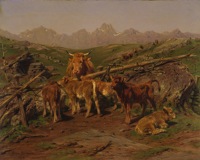 Weaning is the process of gradually introducing a mammal infant, either human or animal, to what will be its adult diet and withdrawing the supply of its mother's milk.

The process takes place only in mammals, as only mammals produce milk. The infant is considered to be fully weaned once it no longer receives any breast milk (or bottled substitute).

Solid food is gradually introduced to a baby's diet, alongside its previous diet of breast or formula milk, at around six months (though this varies slightly from child to child). Before this, a child's digestive system and kidneys are still developing and are not yet ready to deal with solid food.

Soft, runny food such as mashed fruit or vegetables are introduced to babies in the early stages of weaning, as they do not have teeth and are unable to chew. Certain foods are recommended to be avoided, such as those containing nuts or high levels of gluten, salt, or sugar. Foods harbouring bacteria that a young digestive tract could not deal with, such as containing nuts, honey, eggs and shellfish, should also be avoided.

Weaning in other mammals

In science, a lot of mice are used in laboratory experiments. When breeding laboratory mice in a controlled environment, the weaning is defined as the moment when the pups are transferred out of the mothers' cage. Weaning is recommended at 3 to 4 weeks after parturition.