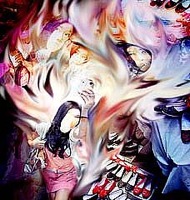 For lessons on the topic of Influence, follow this link.

Social influence can also be described as power - the ability to influence a person/group of people to one's own will. Usually people who possess beauty, significant sums of money, good jobs and so on will possess social influence on other, "ordinary" people. So even if the person doesn't possess any "real" or political power but possesses the things listed above (good looks, money, etc.), he could persuade other people into doing something. However, good looks are not solely why attractive people are able to exert more influence than average looking people, e.g. confidence is the by-product of good looks. Therefore, the individual's self-esteem and perceived Persona is the critical factor in determining the amount of influence one exerts.

Those with access to the media may use this access in an attempt to influence the public. For example, a politician may use speeches to persuade the public to support issues that he or she does not have the power to impose on the public. This is often referred to as using the "bully pulpit".

Another example would be movie stars, who do not usually possess any political power but are familiar to many of the world's citizens and therefore possess social status. They get a lot of media coverage and they may have many enthusiastic fans.

In the case of peer pressure, a person is convinced to do something (such as illegal drugs) which they might not want to do, but which they perceive as "necessary" to keep a positive relationship with other people, such as their friends.

Psychological manipulation refers to attempts to change another person using methods which are exploitative, devious, deceptive, insidious or unfair. Manipulation is always one-sided, unbalanced or unsymmetrical. Manipulation advances the interests and furthers the goals of the manipulator only, often at the victim's expense.

Those perceived as experts may exert social influence as a result of their perceived expertise. This involves credibility, a form of social influence from which one draws upon the notion of trust. People believe an individual to be credible for a variety of reasons, such as perceived experience, attractiveness, etc. Additionally, pressure to maintain one's reputation and not be viewed as fringe may increase the tendency to agree with the group, known as groupthink.[3]

In his book, The Tipping Point, Malcolm Gladwell discusses the way new ideas are transmitted by social influence. New products or fashions are introduced by innovators, who tend to be creative and nonconforming. Then early adopters join in, followed by the early majority. By this time, a substantial number of people are using the idea or product, and normative and informational influence encourages others to conform as well. The early majority is followed by a second group that Gladwell calls the late majority, and then finally by the laggards, who tend to be highly conventional and resistant to change.[5]