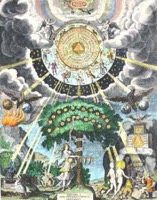 Latin, from Greek archōn, from present participle of archein

Archon (Gr. ἄρχων, pl. ἄρχοντες) is a Greek word that means "ruler", frequently used as the title of a specific public office. It is the masculine present participle of the verb stem αρχ-, meaning "to rule", derived from the same root as monarch and hierarchy.

In the early literary period of ancient Greece the chief magistrates of various Greek city states were called Archon. The term was also used throughout Greek history in a more general sense, ranging from "club leader" to "master of the tables" at syssitia to "Roman governor". In Roman terms, archontes ruled by imperium, whereas Basileis ("Kings") had auctoritas.

In late antiquity some variants of Gnosticism used the term Archon to refer to several servants of the Demiurge, the "creator god", that stood between the human race and a transcendent God that could only be reached through gnosis. In this context they have the role of the angels and demons of the Old Testament.

The Egyptian Gnostic Basilideans accepted the existence of an archon called Abraxas who was the prince of 365 spiritual beings (Irenaeus, Adversus Haereses, I.24). The Orphics accepted the existence of seven archons: Iadabaoth or Ialdabaoth (who created the six others), Iao, Sabaoth, Adonaios, Elaios, Astaphanos and Horaios (Origen, Contra Celsum, VI.31). The commonly-called Pistis Sophia (or The Books of the Savior) gives another set: Paraplex, Hekate, Ariouth (females), Typhon, and Iachtanabas (males).[1]