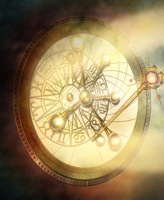 Astrology (from Greek αστρολογία : ἄστρον, astron, "constellation, star"; and -λογία, -logia, "the study of") is a group of systems, traditions, and beliefs which hold that the relative positions of celestial bodies and related details can provide information about personality, human affairs, and other terrestrial matters. A practitioner of astrology is called an astrologer. The scientific community considers astrology a pseudoscience or superstition.

Numerous traditions and applications employing astrological concepts have arisen since its earliest recorded beginnings in the 3rd millennium BC. Astrology has played an important role in the shaping of culture, early astronomy, the Vedas, and various disciplines throughout history. In fact, astrology and astronomy were often indistinguishable before the modern era, with the desire for predictive and divinatory knowledge one of the motivating factors for astronomical observation. Astronomy began to diverge from astrology after a period of gradual separation from the Renaissance up until the 18th century. Eventually, astronomy distinguished itself as the scientific study of astronomical objects and phenomena without regard to the astrological understandings of these phenomena.

For lessons on the topic of Astrology, follow this link.

Astrologers believe that the movements and positions of celestial bodies either directly influence life on Earth or correspond to events experienced on a human scale.[8] Modern astrologers define astrology as a symbolic language, an art form, or a form of divination. Despite differences in definitions, a common assumption of astrology is that celestial placements can aid in the interpretation of past and present events and in the prediction of the future.[1]

Magic was the branch off the evolutionary religious tree which eventually bore the fruit of a scientific age. Belief in astrology led to the development of astronomy; belief in a philosopher's stone led to the mastery of metals, while belief in magic numbers founded the science of mathematics.[2]