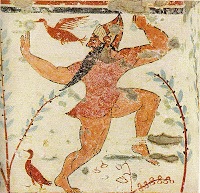 The derivation of the word augur is uncertain; ancient authors believed that it contained the words avi and gero—Latin for "directing the birds"—but historical-linguistic evidence points instead to the root aug-, "to increase, to prosper."

'Come then,' Tarquin said angrily, 'Deduce when they make up in bed, if your augury can, whether what I have in my mind right now is possible.' And when Navius, expert in augury that he was, immediately said that it would happen, Tarquin replied: 'Well, I thought that you would cut a whetstone with a sharp knife. Here, take this and do what your birds have predicted would be possible.' And Navius, hardly delaying at all, took the whetstone and cut it. — Livy, 1.35.2

The story is illustrative of the role of the augur: he does not predict what course of action should be taken, but through his augury he finds signs on whether or not a course already decided upon meets with divine sanction and should proceed.

The augur was a priest and official in the classical world, especially ancient Rome and Etruria. His main role was to interpret the will of the gods by studying the flight of birds: whether they are flying in groups or alone, what noises they make as they fly, direction of flight and what kind of birds they are. This was known as "taking the auspices." The ceremony and function of the augur was central to any major undertaking in Roman society—public or private—including matters of war, commerce, and religion.

Sometimes an etymology is so obvious that you can't believe you've never noticed it before. This was true of cappuccinos and Capuchin monks, and is just as true of inauguration.

When you begin something new, it is a good idea to call in a soothsayer, or augur, to see how it will turn out. They can tell you whether today is a good day to start, and whether you should start at all. This is the inauguration. M.H. Forsyth