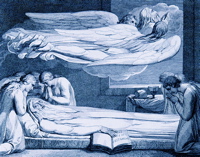 Christian philosophy is a term to describe the fusion of various fields of philosophy, historically derived from the philosophical traditions of Western thinkers such as Plato and Aristotle, with the theological doctrines of Christianity. Christian philosophy originated during the Middle Ages as medieval theologians attempted to demonstrate to the religious authorities that Greek philosophy and Christian faith were, in fact, compatible methods for arriving at divine truth.

As with any fusion of religion and philosophy, the attempt to reconcile the two is difficult. Classical philosophers start with no preconditions for which conclusions they must reach in their investigation. Classical religious believers have a set of religious principles of faith that they hold one must believe. Because of these divergent goals and views, some hold that one cannot simultaneously be a philosopher and a true adherent of a revealed religion. In this view, all attempts at synthesis ultimately fail.

Others hold that a synthesis between the two is possible. One way to find a synthesis is to use philosophical arguments to prove that one's preset religious principles are true. This is known as apologetics and is a common technique found in the writings of many religious traditions, including Judaism, Christianity and Islam, but is not generally accepted as true philosophy by classical philosophers. Another way to find a synthesis is to abstain from holding as true any religious principles of one's faith at all, unless one independently comes to those conclusions from a philosophical analysis. However, this is not generally accepted as being faithful to one's religion by adherents of that religion. A third, rarer and more difficult path is to apply analytical philosophy to one's own religion. In this case a religious person would also be a philosopher, by asking questions such as:

The above outlines how some Christian philosophies conceive their task. Others do not conceive the task of Christian philosophy in this way. For instance, some think that proving the existence of God is a meaningless endeavour since God's existence is not put in question by Christian faith, but assumed. A Christian philosophy which does not seek to prove the existence of God, but assumes it as an ultimata out of which it forms its specific logic and interest, is more apt to address a far different set of tasks in order to reflect on the God-provided creational structures of existence in their diachronic processes of change over time. For such Christian philosophies, most of the questions above belong instead to theology (if legitimate at all), whether the subdivision of theology involved is philosophical theology or apologetics. Neither of these are disciplines of philosophy proper, even though they may borrow methods from outside theology as such. Those Christian philosophies that prioritize creaturely existence with its God-lawed modalities and societal spheres for daily life, do not accept the idea of separate fields "religion" vs "philosophy" that then must be "reconciled." On this alternative view of the Christian philosophical task, philosophy is just one activity among many in a differentiated society, an activity that is entirely appropriate to creaturely human existence, and it may be pursued directly out of the depth of the Christian religion without the mediation of some extraneous reference. All religions, including the atheisms, have ultimate values and therefore a religious depth-dimension of their own. The problem of philosophy arises for them as something other than a task given by God in Christ to humanity, and so theirs is the problem of reconciling their activity as a deontological imperative insofar as they deny that philosophy is inherent in the creational ensemble as one task-activity among the many given by God.

Interaction between Christian and non-Christian philosophers

It's important to note there is not one single philosophy embraced by all philosophers in any of the great religious traditions, not all are dialogical, and atheist-humanist schools are as much in conflict among themselves as are Christian and other self-acknowledged religious schools of philosophizing.

In the case of Reformational philosophy the law-idea of Creation in relation to Fall and Redemption clarifies the understanding of the exceptional role of Jesus the Christ in Creation through the law-modalities that set the conditions of existence for all creatures. There is no record of any writing by Jesus, nor of any systematic philosophy or theology in the formal sense. Several accounts of his life and many of his teachings are recorded in the New Testament, and form the basis for some Christian philosophies. This was one of his greatest failings for if He had written his view of reality in His own words as a separate volume it would have been possible to review history from his perspective and gain a greater understanding of his intellectual dimension of understanding. In some senses it is almost inconceivable that no such document was created because with his standard of forethought to the realisation path of those in his wake it should surely have been of benefit. Alternatively though he was a man who put himself through the extremes of challenges and set ups just to feel the accelerated sense of being alive. To feel a true emotion if you like. He spent so much time thinking from the point of others that own emotions passed through him in advance and only for fleeting moments. He was never truly at one with the world in its embrace and this was to be the greatest of His challenges. He would realise first what they were to realise only later and rarely did they exist in the same moment. Having proven a standard of divine love what was to remain but the challenge to come back again and raise that standard again for real. He had always gone through the extremes of worst first as if it were the end of the continuum of infinity. He could then come back from that and be headed in the direction of the ultimate of heavenly expression and so that was what he chose as a challenge to himself to create.

Hellenism is the traditional designation for the Greek culture of the Roman Empire in the days of Jesus, Paul, and for centuries after. Classical philosophies of the Greeks had already expired and diluted beyond recognition except for small bands of continuators of the traditions of the Pythagoreans, of Plato, and Aristotle (whose library was lost for centuries). The new philosophies of the Hellenistic world were those of the Cynics, Skeptics, and increasingly the Stoics; it's these thinkers and ranters who bring us into the world of Hellenistic philosophy. Slowly, a more integral and rounded tendency emerged within Hellenism, but also in certain respects in opposition at times to it in regard to one philosophical problem or another, or an ensemble of problems. Here are some of those thinkers most closely associated with Hellenistic Christian philosophies, listed more or less in chronological order: