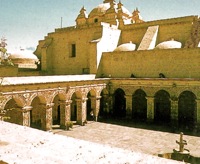 A court or courtyard is an enclosed area, often a space enclosed by a building that is open to the sky. These areas in inns and public buildings were often the primary meeting places for some purposes, leading to the other meanings of court.

Courtyards—private open spaces surrounded by walls or buildings—have been in use in residential architecture for almost as long as people have lived in constructed dwellings. The earliest known courtyard houses were built in Iran and China and date as far back as 3000 BC. Courtyards have historically been used for many purposes including cooking, sleeping, working, playing, gardening, and even places to keep animals.

Before courtyards, open fires were kept burning in a central place within a home, with only a small hole in the ceiling overhead to allow smoke to escape. Over time, these small openings were enlarged and eventually led to the development of the centralized open courtyard we know today. Courtyard homes have been designed and built throughout the world with many variations in every century.

Courtyard homes are perhaps more prevalent in temperate climates, as an open central court can be an important aid to cooling house in warm weather. However, courtyard houses have been found in harsher climates as well for centuries. The comforts offered by a courtyard—air, light, privacy, security, and tranquility—are properties nearly universally desired in human housing.[1]