From Nordan Symposia
(Redirected from Crusader)
Jump to navigationJump to search 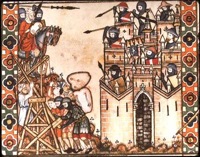 The Crusades were a series of religiously sanctioned military campaigns waged by much of Western Christian Europe, particularly the Franks of France and the Holy Roman Empire. The specific crusades to restore Christian control of the Holy Land were fought over a period of nearly 200 years, between 1095 and 1291. Other campaigns in Spain and Eastern Europe continued into the 15th century. The Crusades were fought mainly by Roman Catholic forces (taking place after the East-West Schism and mostly before the Protestant Reformation) against Muslims who had occupied the near east since the time of the Rashidun Caliphate, although campaigns were also waged against pagan Slavs, pagan Balts, Jews, Russian and Greek Orthodox Christians, Mongols, Cathars, Hussites, Waldensians, Old Prussians, and political enemies of the various popes. Orthodox Christians also took part in fighting against Islamic forces in some Crusades. Crusaders took vows and were granted penance for past sins, often called an indulgence.

The Crusades originally had the goal of recapturing Jerusalem and the Holy Land from Muslim rule and their campaigns were launched in response to a call from the Christian Byzantine Empire for help against the expansion of the Muslim Seljuk Turks into Anatolia. The term is also used to describe contemporaneous and subsequent campaigns conducted through to the 16th century in territories outside the Levant usually against pagans, heretics, and peoples under the ban of excommunication for a mixture of religious, economic, and political reasons. Rivalries among both Christian and Muslim powers led also to alliances between religious factions against their opponents, such as the Christian alliance with the Sultanate of Rum during the Fifth Crusade.

The Crusades had far-reaching political, economic, and social impacts, some of which have lasted into contemporary times. Because of internal conflicts among Christian kingdoms and political powers, some of the crusade expeditions were diverted from their original aim, such as the Fourth Crusade, which resulted in the sack of Christian Constantinople and the partition of the Byzantine Empire between Venice and the Crusaders. The Sixth Crusade was the first crusade to set sail without the official blessing of the Pope.[6] The Seventh, Eighth and Ninth Crusades resulted in Mamluk and Hafsid victories, as the Ninth Crusade marked the end of the Crusades in the Middle East.[1]