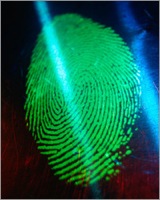 b : analytical evidence (as a spectrogram) that characterizes an object or substance; especially : the chromatogram or electrophoretogram obtained by cleaving a protein by enzymatic action and subjecting the resulting collection of peptides to two-dimensional chromatography or electrophoresis
c : the base-pair pattern in an individual's DNA obtained by DNA fingerprinting

A fingerprint in its narrow sense is an impression left by the friction ridges of a human finger. In a wider use of the term, fingerprints are the traces of an impression from the friction ridges of any part of a human or other primate hand. A print from the foot can also leave an impression of friction ridges. A friction ridge is a raised portion of the epidermis on the digits (fingers and toes), the palm of the hand or the sole of the foot, consisting of one or more connected ridge units of friction ridge skin. These are sometimes known as "epidermal ridges" which are caused by the underlying interface between the dermal papillae of the dermis and the interpapillary (rete) pegs of the epidermis. These epidermal ridges serve to amplify vibrations triggered, for example, when fingertips brush across an uneven surface, better transmitting the signals to sensory nerves involved in fine texture perception. These ridges also assist in gripping rough surfaces, as well as smooth wet surfaces.

Impressions of fingerprints may be left behind on a surface by the natural secretions of sweat from the eccrine glands that are present in friction ridge skin, or they may be made by ink or other substances transferred from the peaks of friction ridges on the skin to a relatively smooth surface such as a fingerprint card. Fingerprint records normally contain impressions from the pad on the last joint of fingers and thumbs, although fingerprint cards also typically record portions of lower joint areas of the fingers.[1]