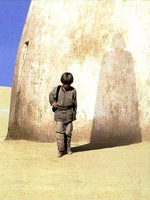 The hardest form of foreshadowing is the way things are implied by mentioning an element that will be used later in this story. Usually, it is mentioned in passing the character's mind or as seemingly insignificant. The best example is that of Chekhov's gun: when a certain setting is described, it is mentioned that a loaded gun is hanging on a wall. Much later on, this is taken off the wall and fired. To draw the reader's attention to the otherwise subtle foreshadowing element, writers may often make repeated references to the object throughout the story.

One of the earliest creations making use of the technique is the Arabian Nights.[1] Early in the tale of "The Three Apples", the contents of a chest, where a body is found, are described in detail, only to serve as a proof of the killer's identity later on.

Another early foreshadowing style is formal patterning, "the organization of the events, actions and gestures which constitute a narrative and give shape to a story; when done well, formal patterning allows the audience the pleasure of discerning and anticipating the structure of the plot as it reveals itself.". In literature, classical foreshadowing serves as a literary device whereby the author plays on common beliefs or causal connections that most viewers or readers will have some direct experience with, thereby causing them to anticipate a specific chain of events. In Romeo and Juliet, both main characters state early on that they would rather defy their families and be in love than live apart.

A hint that is designed to mislead the audience is referred to as a red herring. A similar device is the flashforward. Unlike a flashforward, a foreshadowing only hints at a possible outcome of the story, without describing it explicitly. However, the difference between these two techniques may often be very vague. When it is done in a skillful or "honest" way in a mystery, however, many events which foreshadow the truth also work naturally at the same time as red-herrings at a more simple level, to lead the audience to a false conclusion. An example occurs in the film The Sixth Sense, in which scenes depicting the estrangement and lack of communication which occurs in the psychologist's marriage, and his alienation from the world because of his problems, are later seen as clues of much darker significance (so much so, that some viewers were led to see the film twice, in disbelief at how effectively they were misled by character interactions which could be interpreted in two completely different ways).

The television show Lost has made effective use of the flashforward technique, beginning at the end of season three with a twist ending in the episode "Through the Looking Glass". The first flashforward which the audience sees is originally believed to be a flashback, as flashbacks had been the only way of telling off-island stories up until that point. So far in season four, most of the episodes have contained flashforwards, although flashbacks are still used.

Foreshadowing can be carried out by characters predicting the future.[2] This may range from a woman predicting that her son will come to a bad end if he continues on his way, to a character with the explicit ability to foresee the future prophesying an event. Similarly, omens, such as breaking a mirror, can be used to foreshadow bad luck. Northrop Frye, in his Anatomy of Criticism, observed that such use of omens and foretelling are plot devices, independent of actual belief in foretelling for both writer and audience.[3] Such predictions can, like other hints, act as red herrings; even explicit foretelling may, by a quibble, come true in an unexpected manner.

The earliest example of foreshadowing is the self-fulfilling prophecy, a prophecy that directly or indirectly causes itself to become true. An early example appears in classical Sanskrit literature. In the story of Krishna in the Indian epic Mahabharata, the ruler of the Mathura kingdom, Kansa (also referred to as Kamsa), afraid of a prophecy that predicted his death at the hands of his sister Devaki's son, had her cast into prison where he planned to kill all of her children at birth. After killing the first six children, and Devaki's apparent miscarriage of the seventh, Krishna (the eighth son) took birth. As his life was in danger he was smuggled out to be raised by his foster parents Yashoda and Nanda in the village of Gokul. Years later, Kansa learnt about the child's escape and kept sending various demons to put an end to him. The demons were defeated at the hands of Krishna and his brother Balarama. Krishna as a young man returned to Mathura to overthrow his uncle, and Kansa was eventually killed by his nephew Krishna. It was due to Kansa's attempts to prevent the prophecy that led to it coming true, thus fulfilling the prophecy. The 2006 Indian film Krrish is a modern take on the story of Krishna.

Usually more subtle, foreshadowing works on the symbolic level. For example, if a character must break up a schoolyard fight among some boys, it might symbolically foreshadow the family squabbles that will become the central conflict of the story. Other times, it is seemingly inconsequential, with the goal of having the audience be surprised by the story's climax and yet find it justified. If a character learns that a certain man was a regular at the diner where her mother worked many years before, it helps to justify the events later in which she learns that the man is her biological father.

If foreshadowing is not done carefully, the common experiences of life can make the foreshadowing too obvious and allow the audience to predict the outcome of the story. Example: a character behaves in an odd and erratic fashion and complains continuously of a headache, then later is diagnosed with a brain tumor. Foreshadowing can also be used dishonestly in a mystery, where a series of events which points to a conclusion is later found to be composed of unlikely coincidences which have been "dishonestly" added to the story by the author in an artificial way, with the sole purpose of drawing the audience into an incorrect expectation. In such cases, the audience feels manipulated, and the story may be less satisfying.

The high mission of any art is, by its illusions, to foreshadow a higher universe reality, to crystallize the emotions of time into the thought of eternity. 48.7.23