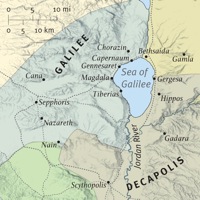 Galilee (Hebrew: הגליל‎ HaGalil, lit: the province, Ancient Greek: Γαλιλαία, Latin: Galileia, Arabic: الجليل‎ al-Jalīl), is a large region in northern Israel which overlaps with much of the administrative North District of the country. Traditionally divided into Upper Galilee (Hebrew: גליל עליון‎ Galil Elyon), Lower Galilee (Hebrew: גליל תחתון‎ Galil Tahton), and Western Galilee (Hebrew: גליל מערבי‎ Galil Ma'aravi), extending from Dan to the north, at the base of Mount Hermon, along Mount Lebanon to the ridges of Mount Carmel and Mount Gilboa to the south, and from the Jordan Rift Valley to the east across the plains of the Jezreel Valley and Acre to the shores of the Mediterranean Sea and the Coastal Plain in the west.

Most of Galilee consists of rocky terrain, at heights of between 500 and 700 meters. There are several high mountains including Mount Tabor and Mount Meron in the region, which have relatively low temperatures and high rainfall. As a result of this climate, flora and wildlife thrive in the region, while many birds annually migrate from colder climates to Africa and back through the Hula–Jordan corridor. The streams and waterfalls, the latter mainly in Upper Galilee, along with vast fields of greenery and colorful wildflowers, as well as numerous towns of biblical importance, make the region a popular tourist destination.

According to the Bible, Solomon rewarded Hiram I for certain services by giving him the gift of an upland plain among the mountains of Naphtali. Hiram called it "the land of Cabul". In Isaiah (9:1), the region is referred to as "the District of the Nations" (גְּלִיל - הַגּוׁיִם; lit:Glil HaGoyim), with much of this name being retained in its present name of Galil or HaGalil. According to one view, during the Hasmonean period, with the revolt of the Maccabees and the decline of the Seleucid Empire, Galilee was conquered by the newly independent state of Judaea, and the region was resettled by Jews. However, according to another view there were not particularly large-scale population movements during this period, Galilee became Jewish because its population decided to recognize the authority of the Jerusalem temple rather than the Samaritan temple.

In Roman times, the country was divided into Judea, Samaria, and Galilee, which comprised the whole northern section of the country, and was the largest of the three regions. Herod Antipas, son of Herod the Great, ruled Galilee as tetrarch.

The Galilee region was presumably the home of Jesus during at least 30 years of his life. The first three Gospels of the New Testament are mainly an account of Jesus' public ministry in this province, particularly in the towns of Nazareth and Capernaum. Galilee is also cited as the place where Jesus cured a blind man.

After the Arab caliphate took control of the region in 638, it became part of Jund al-Urrdun (District of Jordan). Its major towns were Tiberias — which was capital of the district—Qadas, Baysan, Acre, Saffuriya and Kabul.[2] The Shia Fatimids conquered the region in the 10th century; a breakaway sect, venerating the Fatimid caliph al-Hakim, formed the Druze religion, centered in and to north of, Galilee. Eastern Galilee, however, retained a Jewish majority for most of its history.

The Jewish population of Galilee increased significantly following their expulsion from Spain and welcome from the Ottoman Empire. The community for a time made Safed an international center of cloth weaving and manufacturing, as well as a key site for Jewish learning.[3] Today it remains one of Judaism's four holy cities and a center for kabbalah.

In the mid 18th century, Galilee was caught up in a struggle between the Bedouin leader Dhaher al-Omar and the Ottoman authorities who were centered in Damascus. Al-Omar ruled Galilee for 25 years until Ottoman loyalist Jezzar Pasha conquered the region in 1775.

In the early 20th century, Galilee was inhabited by Arab Christians, Arab Muslims, Druze and Jews, whilst the Ottomans also settled minorities from elsewhere in their empire including Circassians and Bosniaks. Two Circassian villages exist in the Galilee region today. The Jewish population was increased significantly by Zionist immigration.

After the 1948 Arab–Israeli war nearly the whole of Galilee came under Israel's control. A large portion of the population fled or were forced to leave, leaving dozens of entire villages empty; however, a large Israeli Arab community remained based in and near the cities of Nazareth, Acre, Tamra, Sakhnin and Shefa-'Amr, due to some extent to a successful rapprochement with the Druze. The kibbutzim around the Sea of Galilee were sometimes shelled by the Syrian army's artillery until Israel seized the Golan Heights in the 1967 Six-Day War.

During the 1970s and the early 1980s, the Palestine Liberation Organization (PLO) launched several attacks on towns of the Upper and Western Galilee from Lebanon. Israel initiated Operation Litani (1979) and Operation Peace For Galilee (1982) with the stated objectives of destroying the PLO infrastructure in Lebanon and protecting the citizens of the Galilee. Israel occupied much of Southern Lebanon until 1985 when it withdrew to a narrow security buffer zone.

Until the year 2000, Hezbollah, and earlier Amal, continued to fight the Israeli Defence Forces, sometimes shelling Upper Galilee communities with Katyusha rockets. In May 2000, Israeli prime minister Ehud Barak unilaterally withdrew IDF troops from southern Lebanon, maintaining a security force on the Israeli side of the international border recognized by the UN. However, clashes between Hezbollah and Israel continued along the border, and UN observers condemned both for their attacks.

The 2006 Israel-Lebanon conflict was characterized by round-the-clock Katyusha rocket attacks (with a greatly extended range) by Hezbollah on the whole of Galilee, with long-range ground-launched missiles, hitting as far south as the Sharon plain, Jezreel Valley, and Jordan Valley below the Sea of Galilee.[1]