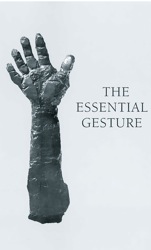 A gesture is a form of non-verbal communication made with a part of the body, used instead of or in combination with verbal communication. The language of gesture allows individuals to express a variety of feelings and thoughts, from contempt and hostility to approval and affection. Most people use gestures and body language in addition to words when they speak. The use of gesture as language by some ethnic groups is more common than in others, and the amount of such gesturing that is considered culturally acceptable varies from one location to the next.

Gestures have been studied throughout the centuries from different view points. Quintillian in the antiquity studied in his Institution Oratoria how gesture may be used in rhetorical discourse. Another broad study of gesture was published by John Bulwer in 1644. Bulwer analyzed dozens of gestures and provided a guide on how to use gestures to increase eloquence and clarity for public speaking. Andrea De Jorio published an extensive account of gestural expression in 1832. Today, one of the most prominent researchers in the field of gesture research is Adam Kendon. He has investigated many aspects of gestures, including their role in communication, conventionalization of gesture, integration of gesture and speech, and the evolution of language. Other prominent researchers in this field include Susan Goldin-Meadow and David McNeill. Susan Goldin-Meadow (2003) has investigated intensively the role of gesture in problem solving in children. David McNeill (1992, 2006)has developed a broad theory about how gesture and speech are part of a single thought process. Adam Kendon is a leading authority on the study of gesture, and has also published important studies in social interaction. He has published over a hundred articles and several books on the role of the body in social interaction.

For lessons on the topic of Gesture, follow this link.

Gestures play a major role in many aspects of human life. Gesturing is probably a universal, there has been no report of a community that does not gesture. Gestures are a crucial part of everyday conversation such as chatting, describing a route, negotiating prices on a market; they are ubiquitous. Gestures have been documented in the arts such as in Greek vase paintings, Indian Miniatures or European paintings.

Gestures play a central role in religious or spiritual rituals such as the Christian sign of the cross. In Hinduism and Buddhism, a mudra (Sanskrit, literally "seal") is a symbolic gesture made with the hand or fingers. Each mudra has a specific meaning, playing a central role in Hindu and Buddhist iconography. An example is the Vitarka mudra, the gesture of discussion and transmission of Buddhist teaching. It is done by joining the tips of the thumb and the index together, while keeping the other fingers straight.

Different types of gestures are distinguished. Well-known gestures are the so-called emblems or quotable gestures. These are culture-specific gestures that can be used as replacement for words. Communities have repertoires of such gestures. A single emblematic gesture can a have very different significance in different cultural contexts, ranging from complimentary to highly offensive.

Other types of gestures are the ones we use when we speak. These gestures are closely coordinated with speech. The meaningful part of the gesture is temporally synchronized (that is, occurs at the same time) with the co-expressive parts of speech. For example, a gesture that depicts the act of throwing will be synchronous with the word 'threw' in the utterance "and then he threw the ball right into the window."[citation needed] Other gestures, like the so-called beat gestures, are used in conjunction with speech and keep time with the rhythm of speech to emphasize certain words or phrases. These types of gestures are integrally connected to speech and thought processes.