From Nordan Symposia
(Redirected from Heavenly)
Jump to navigationJump to search 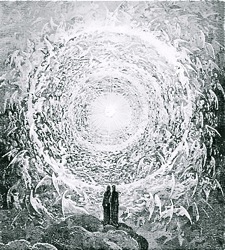 Heaven may refer to the physical heavens, the sky, or the seemingly endless expanse of the universe beyond. The term is used to refer to a plane of existence (sometimes held to exist in our own universe) in religions and spiritual philosophies, typically described as the holiest possible place, accessible by people according to various standards of divinity, goodness, piety, etc.

The modern English word Heaven derives from the word heven around 1150, which developed from the Old English heofon around 1000 referring to the Christianized "place where God dwells" but earlier meaning "sky, firmament". The Anglo-Saxons knew the concept of Paradise, which they expressed with words such as neorxnawang, literally (place of) no toil nor worries (attested from around 725 in Beowulf.

School of the Heavens

The realm of heaven is a school whose day is composed of three periods; home, work, and rest. In these periods are taught three courses; facts, meanings, and values. Between each period, ample time is provided for play. On the playground are found three spheres that correspond to the courses studied. One is large and heavy, always moving in a linear fashion. The second is larger than the first, but ever so light, and moves in an unpredictable and surprising manner while the third is truly glorious, more like a bubble of varying sizes and shapes. It swirls with eddies of ever-changing colors, and can be touched only with the breath. Some children are drawn to one of these more than the others, but all play with each at different times. While the object of the school is unwritten, it is rumored to be the growth of affection that emerges as the children come to know each other, only better than they do their lessons.