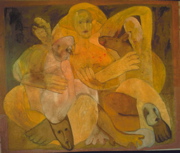 The human condition encompasses the totality of the experience of being human and living human lives. As humans are mortal entities, there are a series of biologically determined events that are common to most human lives, and some that are inevitable for all. Going back to the Old Testament parable of Adam and Eve in the garden of Eden (they ate from the tree of knowledge and became ashamed of their nakedness) humans have faced a conflict between their biological existence, and the intellectual rationalizations that they are capable of. In other words, the conflict between the biological forces, such as death and mating, and the ability for humans to intellectually and emotionally come to terms with these events and the ongoing way in which humans react to or cope with them is the human condition. However, understanding the precise nature and scope of what is meant by the human condition is itself a philosophical problem.

The term is also used in a metaphysical sense, to describe the joy, terror and other feelings or emotions associated with being and existence. Humans, to an apparently superlative degree amongst all living things, are aware of the passage of time, can remember the past and imagine the future, and are intimately aware of their own mortality. Only human beings are known to ask themselves questions relating to the purpose of life beyond the base need for survival, or the nature of existence beyond that which is empirically apparent: What is the meaning of existence? Why was I born? Why am I here? Where will I go when I die? The human struggle to find answers to these questions — and the very fact that we can conceive them and ask them — is what defines the human condition in this sense of the term.

For lessons on the topic of the Human Condition, follow this link.

Although the term Hannah Arendt, The Human Condition ISBN 0226025985 itself may have gained popular currency with The Human Condition, a film trilogy directed by Masaki Kobayashi, which examined these and related concepts, the quest to understand the human condition dates back to the first attempts by humans to understand themselves and their place in the universe.[1]