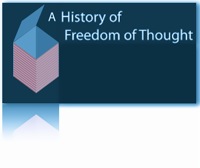 Intellectual history refers to the history of the people who create, discuss, write about and in other ways propagate ideas. Although the field emerged from European discourses of Kulturgeschichte and Geistesgeschichte, the historical study of ideas has engaged not only western intellectual traditions, including, but not limited to, those in the far east, near east, mid-east and Africa.

Intellectual history is closely related to the history of philosophy and the history of ideas. Its central perspective suggests that ideas do not change in isolation from the people who create and use them and that one must study the culture, lives and environments of people to understand their notions and ideas. This is also frought with the sentiment of hostility towards, or mistrust of, intellectuals and intellectual pursuits known as anti-intellectualism. This may be expressed in various ways, such as attacks on the merits of science, education, or literature.

Europe and the West

An intellectual is one who tries to use his or her intellect to work, study, reflect, speculate on, or ask and answer questions with regard to a variety of different ideas. There are, broadly, three modern definitions at work in discussions about intellectuals. First, 'intellectuals' as those deeply involved in ideas, books, the life of the mind. Second, 'intellectuals' as a recognizable occupational class consisting of lecturers, professors, lawyers, doctors, scientist, etcetera. Third, cultural "intellectuals" are those of notable expertise in culture and the arts, expertise which allows them some cultural authority, and who then use that authority to speak in public on other matters.

The social/intellectual context in the writings of western European history includes:

Asia and the Far East

In ancient China literati referred to the government officials who formed the ruling class in China for over two thousand years. These scholar-bureaucrats were a status group of educated laymen, not ordained priests. They were not a hereditary group as their position depended on their knowledge of writing and literature. After 200 B.C. the system of selection of candidates was influenced by Confucianism and established its ethic among the literati. The Hundred Flowers Campaign in China was largely based on the government's wish for a mobilization of intellectuals; with very sour consequences later.

Confucianism is a Chinese ethical and philosophical system originally developed from the teachings of the early Chinese sage Confucius. Confucius was the founder of the teachings of Confucianism. Confucianism is a complex system of moral, social, political, philosophical, and religious thought which has had tremendous influence on the culture and history of East Asia up to the 21st century. Some people in Europe have considered it to have been the "state religion" in East Asian countries because of governmental promotion of Confucianist values and needs.

Another avenue of intellectualism in Asia has been Buddhism. According to the Buddhist scriptures, in his lifetime, the Buddha had not answered several philosophical questions. On issues like whether the world is eternal or non-eternal, finite or infinite, unity or separation of the body and the self, complete inexistence of a person after nirvana and then death etc, the Buddha had remained silent. The scriptures explain that such questions distract from practical activity for realizing enlightenment.

In numerous Mahayana sutras and Tantras, the Buddha stresses that Dharma (Truth) and the Buddha himself in their ultimate modus cannot truly be understood with the ordinary rational mind or logic: both Buddha and Reality (ultimately One) transcend all worldly concepts. The "prajna-paramita" sutras have this as one of their major themes. What is urged is study, mental and moral self-cultivation, and veneration of the sutras, which are as fingers pointing to the moon of Truth, but then to let go of ratiocination and to experience direct entry into Liberation itself.

The Buddha in the self-styled "Uttara-Tantra", the Mahaparinirvana Sutra, insists that, while pondering upon Dharma is vital, one must then relinquish fixation on words and letters, as these are utterly divorced from Liberation and the Buddha. The Tantra entitled the "All-Creating King" (Kunjed Gyalpo Tantra) also emphasises how Buddhic Truth lies beyond the range of thought and is ultimately mysterious. The Supreme Buddha, Samantabhadra, states there:

"The mind of perfect purity [i.e. the Awakened Mind of Buddha] ... is beyond thinking and inexplicable ... It dwells in the self-perfected bliss which is deedless and self-perfected ... I am the best path of liberation. It is a path, subtle and difficult to understand, which is non-speculative and beyond thinking ... It cannot be captured in words ... It is firm, difficult to comprehend, and totally inexplicable." (The Sovereign All-Creating Mind tr. by E.K. Neumaier-Dargyay, pp. 111–112).

Also later, the famous Indian Buddhist yogi and teacher mahasiddha Tilopa discouraged any intellectual activity in his 6 words of advice. Buddhist missionaries, however, often faced philosophical questions from other religions whose answers they themselves did not know. For those, who have attachment to intellectualism, Buddhist scholars produced a prodigious quantity of intellectual theories, philosophies and worldview concepts. See e.g. Abhidharma, Buddhist philosophy and Reality in Buddhism.

Africa and the Middle East

In the Near East, Islam and modernity encompass the relation and compatibility between the phenomenon of modernity, its related concepts and ideas, and the religion of Islam. In order to understand the relation between Islam and modernity, one point should be made in the beginning. Both Islam and modernity are not simple and unified entities. They are abstract quantities which could not be reduced into simple categories. The history of Islam, like that of other religions, is a history of different interpretations and approaches to Islam. "There is no a-historical Islam that is outside the process of historical development." Similarly, modernity is a complex and multidimensional phenomenon rather than a unified and coherent phenomenon. It has historically had different schools of thoughts moving in many directions.

Ali al-Masudi is a well known Arab intellectual in history, known as the “Herodotus of the Arabs.” He often encourages his readers to consult other books he has written, expecting these to be accessible to his readership. They also note the stark contrast between contemporary European conditions confronting say the author of the Anglo-Saxon Chronicle and this highly literate Islamic world. He was the first Arab to combine history and scientific geography in a large-scale work, “The Meadows of Gold and Mines of Gems”, a world history. Ibn Khaldūn was a famous Arab Muslim historian, historiographer, demographer, economist, philosopher and sociologist born in present-day Tunisia. He is regarded as a forefather of demography, historiography, philosophy of history, and sociology, and is viewed as one of the forerunners of modern economics. He is best known for his Muqaddimah "Prolegomenon".

Persian philosophy can be traced back as far as to Old Iranian philosophical traditions and thoughts which originated in ancient Indo-Iranian roots and were considerably influenced by Zarathustra's teachings. Throughout Iranian history and due to remarkable political and social changes such as the Macedonian, Arab and Mongol invasions of Persia a wide spectrum of schools of thoughts showed a variety of views on philosophical questions extending from Old Iranian and mainly Zoroastrianism-related traditions to schools appearing in the late pre-Islamic era such as Manicheism and Mazdakism as well as various post-Islamic schools. Iranian philosophy after Arab invasion of Persia, is characterized by different interactions with the Old Iranian philosophy, the Greek philosophy and with the development of Islamic philosophy. The Illumination School and the Transcendent Philosophy are regarded as two of the main philosophical traditions of that era in Persia.

Intellectual movements in Iran involve the Iranian experience of modernism, through which Iranian modernity and its associated art, science, literature, poetry, and political structures have been evolving since the 19th century. Religious intellectualism in Iran develops gradually and subtly. It reached its apogee during the Persian Constitutional Revolution (1906-11). The process involved numerous philosophers, sociologists, political scientists and cultural theorists. However the associated art, cinema and poetry remained to be developed.

The African Renaissance is a concept popularized by South African President Thabo Mbeki in which the African people and nations are called upon to solve the many problems troubling the African continent. It reached its height in the late 1990s but continues to be a key part of the post-apartheid intellectual agenda. The elements of this would eventually be seen to comprise the African Renaissance, social cohesion, democracy, economic rebuilding and growth and the establishing of Africa as a significant player in geo-political affairs.

In Medieval Muslim Algeria, spanning from the 600s to the 1600s, North Africa benefited economically and culturally during the Almoravid period, which lasted until 1147. Al-Andalus was a great source of artistic and intellectual inspiration for the African continent. The most famous writers of Andalus worked in the Almoravid court, and the builders of the Grand Mosque of Tilimsan, completed in 1136, used as a model the Grand Mosque of Córdoba.

Today, Taban Lo Liyong is one of Africa's well-known poets and writers of fiction and literary criticism. His eccentric ideologies, as well as his on-going denigration of the post-colonial system of education in East Africa, have inspired criticism and controversy since the late 1960's.

With the rise of Afrocentrism, a recently developed academic, philosophical, and historical approach to the study of world history, the push away from Eurocentrism has led to the focus on the contributions of African people and their model of world civilization and history. Afrocentrism aims to shift the focus from a perceived European-centered history to an African-centered history. More broadly, Afrocentrism is concerned with distinguishing the influence of European and Oriental peoples from African achievements.