From Nordan Symposia
(Redirected from Perfectionist)
Jump to navigationJump to search 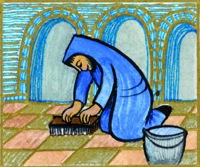 b : the theological doctrine that a state of freedom from sin is attainable on earth

For lessons on the related topic of Perfection, follow this link.

Perfectionism, in psychology, is a personality disposition characterized by an individual striving for flawlessness and setting excessively high performance standards, accompanied by overly critical self-evaluations and concerns regarding others' evaluations. It is best conceptualized as a multidimensional characteristic, as psychologists tend to agree that there are both negative and positive aspects of perfectionism.] In its maladaptive form, perfectionism drives individuals to attempt to achieve an unobtainable ideal, and their failure to meet their expectations causes psychological distress. Adaptive perfectionism can motivate people to reach their goals, and they derive pleasure from doing so.

Perfectionists have also been described as those who strain compulsively and unceasingly toward unobtainable goals, and who measure their self-worth with their productivity and accomplishment. Pressuring oneself to achieve such unrealistic goals inevitably sets the individual up for disappointment. Perfectionists tend to be harsh critics of themselves when they do not meet the standards they set for themselves.

Perfectionism can drive people to accomplishments and provide the motivation to persevere in the face of discouragement and obstacles. Roedell (1984) argues:

"In a positive form, perfectionism can provide the driving energy which leads to great achievement. The meticulous attention to detail, necessary for scientific investigation, the commitment which pushes composers to keep working until the music realises the glorious sounds playing in the imagination, and the persistence which keeps great artists at their easels until their creation matches their conception all result from perfectionism."

Slaney and his colleagues found that adaptive perfectionists had lower levels of procrastination than non-perfectionists. In the field of positive psychology, an adaptive and healthy variation of perfectionism is referred to as Optimalism.

Exceptionally talented individuals who excel in their field sometimes show signs of perfectionism. High-achieving athletes, scientists, and artists often show signs of perfectionism. For example, some contend that Michelangelo's perfectionism may have motivated him to painstakingly complete his masterpieces including the statue David and the Sistine Chapel. Scientists that intently pursue their interests in the laboratory are often considered perfectionists. This obsession with an end result may motivate them to work diligently and maintain an impressive work ethic. Famous figures have publicly admitted that they have perfectionist tendencies. Martha Stewart once described herself to Oprah Winfrey as a "maniacal perfectionist." An intense focus on one's passion can lead to success.

The adaptive form of perfectionism is typically considered the positive component of this personality trait. Adaptive perfectionism includes preferences for order and organization, a persistent strive for excellence, and conscientious orientation to tasks and performance. All of these characteristics are accompanied by low criticism and negativity, and high support and self-esteem. The positive, adaptive forms of perfectionism are more closely associated with the Big Five personality factor of Conscientiousness, whereas maladaptive forms are more similar to Neuroticism.

In its pathological form, perfectionism can be damaging. It can take the form of procrastination when used to postpone tasks and self-deprecation when used to excuse poor performance or to seek sympathy and affirmation from other people. In general, maladaptive perfectionists feel constant pressure to meet their high standards, which creates cognitive dissonance when one cannot meet their own expectations. Perfectionism has been associated with numerous other psychological and physiological complications as well. [1]

When we attempt to conceive of perfection in all phases and forms of relativity, we encounter seven conceivable types: