From Nordan Symposia
(Redirected from Quanta)
Jump to navigationJump to search 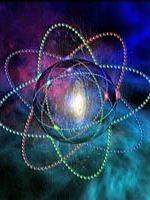 In physics, a quantum (plural: quanta) is the minimum unit of any physical entity involved in an interaction. An example of an entity that is quantized is the energy transfer of elementary particles of matter (called fermions) and of photons and other bosons. The word comes from the Latin "quantus", for "how much." Behind this, one finds the fundamental notion that a physical property may be "quantized", referred to as "quantization". This means that the magnitude can take on only certain discrete numerical values, rather than any value, at least within a range. There is a related term of quantum number.

A photon, for example, is a single quantum of light, and may thus be referred to as a "light quantum". The energy of an electron bound to an atom (at rest) is said to be quantized, which results in the stability of atoms, and of matter in general.

As incorporated into the theory of quantum mechanics, this is regarded by physicists as part of the fundamental framework for understanding and describing nature at the infinitesimal level, for the very practical reason that it works. It is "in the nature of things", not a more or less arbitrary human preference.[1]

The concept of quantization was discovered in 1900 by German physicist Max Planck, who had been trying to understand the emission of radiation from heated objects, known as black body radiation. By assuming that energy can only be absorbed or released in tiny, differential, discrete packets he called "quanta," Planck accounted for the fact that certain objects change color when heated. On December 14, 1900, Planck reported his revolutionary findings about quanta to the German Physical Society and introduced the idea of quantization for the first time as a part of his research on black body radiation. As a result of his experiments, Planck deduced the numerical value of h, known as the Planck constant, and could also report a more precise value for the Avogadro-Loschmidt number, the number of real molecules in a mole, and the unit of electrical charge, to the German Physical Society. After his theory was validated, Planck was awarded the Nobel Prize in Physics in 1918 for his discovery.