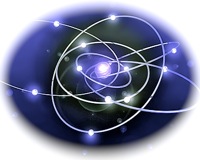 Quantum mechanics (QM) is a set of principles describing the physical reality at the deepest level of matter (molecules and atoms) and the subatomic (electrons, protons, and even smaller particles). These descriptions include the simultaneous wave-like and particle-like behavior of both matter[1] and radiation[2] ("wave–particle duality"). Quantum Mechanics is a mathematical description of reality, like any scientific model. Some of its predictions and implications go against our "common sense" of how humans see a set of bodies (a system) behave. This isn't necessarily a failure of QM - it's more likely to be a reflection of how we as humans are used to describing things at the scale of metres and days rather than much smaller. QM says that the most complete description we can make of a system is its wavefunction, which is just a number varying between time and place. We can derive things from the wavefunction, such as the position of a particle, or its momentum. Yet the wavefunction describes probabilities, and it turns out that some physical quantities which we usually assume are both fully defined together simultaneously for a system are not simultaneously given definite values in QM. It is not that the experimental equipment we're using to measure is not precise enough - the two quantities in question just really aren't defined at the same time by the Universe. For instance, location and velocity just do not exist simultaneously for a body (this is called the Heisenberg uncertainty principle

Certain systems, however, do exhibit quantum mechanical effects on a larger scale; superfluidity (the frictionless flow of a liquid at temperatures near absolute zero) is one well-known example. Quantum theory also provides accurate descriptions for many previously unexplained phenomena such as black body radiation and the stability of electron orbitals. It has also given insight into the workings of many different biological systems, including smell receptors and protein structures.[3]

Even so, classical physics often can be a good approximation to results otherwise obtained by quantum physics, typically in circumstances with large numbers of particles or large quantum numbers. (However, some open questions remain in the field of quantum chaos.)

The word quantum is Latin for "how great" or "how much."[4] In quantum mechanics, it refers to a discrete unit that quantum theory assigns to certain physical quantities, such as the energy of an atom at rest (see Figure 1, at right). The discovery that waves have discrete energy packets (called quanta) that behave in a manner similar to particles led to the branch of physics that deals with atomic and subatomic systems which we today call quantum mechanics. It is the underlying mathematical framework of many fields of physics and chemistry, including condensed matter physics, solid-state physics, atomic physics, molecular physics, computational chemistry, quantum chemistry, particle physics, and nuclear physics. The foundations of quantum mechanics were established during the first half of the twentieth century by Werner Heisenberg, Max Planck, Louis de Broglie, Albert Einstein, Niels Bohr, Erwin Schrödinger, Max Born, John von Neumann, Paul Dirac, Wolfgang Pauli, David Hilbert, and others.[5] Some fundamental aspects of the theory are still actively studied.[6]

Quantum mechanics is essential to understand the behavior of systems at atomic length scales and smaller. For example, if classical mechanics governed the workings of an atom, electrons would rapidly travel towards and collide with the nucleus, making stable atoms impossible. However, in the natural world the electrons normally remain in an uncertain, non-deterministic "smeared" (wave-particle wave function) orbital path around or "through" the nucleus, defying classical electromagnetism.[7]

Quantum mechanics was initially developed to provide a better explanation of the atom, especially the spectra of light emitted by different atomic species. The quantum theory of the atom was developed as an explanation for the electron's staying in its orbital, which could not be explained by Newton's laws of motion and by Maxwell's laws of classical electromagnetism.[8]

In the formalism of quantum mechanics, the state of a system at a given time is described by a complex wave function (sometimes referred to as orbitals in the case of atomic electrons), and more generally, elements of a complex vector space.[9] This abstract mathematical object allows for the calculation of probabilities of outcomes of concrete experiments. For example, it allows one to compute the probability of finding an electron in a particular region around the nucleus at a particular time. Contrary to classical mechanics, one can never make simultaneous predictions of conjugate variables, such as position and momentum, with accuracy. For instance, electrons may be considered to be located somewhere within a region of space, but with their exact positions being unknown. Contours of constant probability, often referred to as “clouds,” may be drawn around the nucleus of an atom to conceptualize where the electron might be located with the most probability. Heisenberg's uncertainty principle quantifies the inability to precisely locate the particle given its conjugate.[10] The other exemplar that led to quantum mechanics was the study of electromagnetic waves such as light. When it was found in 1900 by Max Planck that the energy of waves could be described as consisting of small packets or quanta, Albert Einstein exploited this idea to show that an electromagnetic wave such as light could be described by a particle called the photon with a discrete energy dependent on its frequency. This led to a theory of unity between subatomic particles and electromagnetic waves called wave–particle duality in which particles and waves were neither one nor the other, but had certain properties of both. While quantum mechanics describes the world of the very small, it also is needed to explain certain “macroscopic quantum systems” such as superconductors and superfluids.[11] Broadly speaking, quantum mechanics incorporates four classes of phenomena that classical physics cannot account for: (I) the quantization (discretization) of certain physical quantities, (II) wave-particle duality, (III) the uncertainty principle, and (IV) quantum entanglement. Each of these phenomena is described in detail in the article found at this link.

The following titles, all by working physicists, attempt to communicate quantum theory to lay people, using a minimum of technical apparatus.