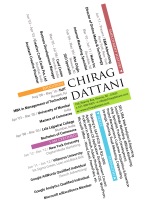 French, literally ‘resumed,’ past participle (used as a noun) of résumer .

A résumé French: [ʁezyme]), also spelled resumé or resume, is a document used by persons to present their backgrounds and skills. Résumés can be used for a variety of reasons, but most often they are used to secure new employment. A typical résumé contains a summary of relevant job experience and education. The résumé is usually one of the first items, along with a cover letter and sometimes an application for employment, which a potential employer sees regarding the job seeker and is typically used to screen applicants, often followed by an interview. The résumé is comparable to a curriculum vitae (CV) in many countries, although in English Canada, the United States and Australia a résumé is substantially shorter than a CV.

In many contexts, a résumé is short (usually one to three pages), and directs a reader's attention to those aspects of a person's background that are directly relevant to a particular position. Many résumés contain keywords that potential employers are looking for, make heavy use of active verbs, and display content in a flattering manner.

A résumé is a marketing tool in which the content should be adapted to suit each individual job application and/or applications aimed at a particular industry. The transmission of résumés directly to employers became increasingly popular as late as 2002. Job seekers were able to circumvent the job application process and reach employers through direct email contact and résumé blasting, a term meaning the mass distribution of résumés to increase personal visibility within the job market. However the mass distribution of résumés to employers can often have a negative effect on the applicant's chances of securing employment as the résumés tend not to be tailored for the specific positions the applicant is applying for. It is usually therefore more sensible to adjust the résumé for each position applied for.

The complexity or simplicity of various résumé formats tends to produce results varying from person to person, for the occupation, and to the industry. It is important to note that résumés or CVs used by medical professionals, professors, artists and people in other specialized fields may be comparatively longer. For example, an artist's résumé, typically excluding any non-art-related employment, may include extensive lists of solo and group exhibitions. Interestingly, when employers review a résumé they typically only spend ten to fifteen seconds, therefore the top half of a résumé is the prime real estate for important information.

The Internet is enabling new technologies to be used on résumés, such as video résumés—especially popular for multimedia job seekers. Another emerging technology is graphic-enabled résumés.