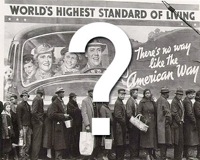 Standard of living is generally measured by standards such as real (i.e. inflation adjusted) income per person and poverty rate. Other measures such as access and quality of health care, income growth inequality and educational standards are also used. Examples are access to certain goods (such as number of refrigerators per 1000 people), or measures of health such as life expectancy. It is the ease by which people living in a time or place are able to satisfy their needs and/or wants.

The idea of a 'standard' may be contrasted with the quality of life, which takes into account not only the material standard of living, but also other more intangible aspects that make up human life, such as leisure, safety, cultural resources, social life, physical health, environmental quality issues etc. More complex means of measuring well-being must be employed to make such judgments, and these are very often political, thus controversial. Even between two nations or societies that have similar material standards of living, quality of life factors may in fact make one of these places more attractive to a given individual or group.

However, there can be problems even with just using numerical averages to compare material standards of living, as opposed to, for instance, a Pareto index (a measure of the breadth of income or wealth distribution). Standards of living are perhaps inherently subjective. As an example, countries with a very small, very rich upper class and a very large, very poor lower class may have a high mean level of income, even though the majority of people have a low "standard of living". This mirrors the problem of poverty measurement, which also tends towards the relative. This illustrates how distribution of income can disguise the actual standard of living.

Likewise Country A, a perfectly socialist country with a planned economy with very low average per capita income would receive a higher score for having lower income inequality than Country B with a higher income inequality, even if the bottom of Country B's population distribution had a higher per capita income than Country A. Real examples of this include former East Germany compared to former West Germany or North Korea compared to South Korea. In each case, the socialist country has a low income discrepancy (and therefore would score high in that regard), but lower per capita incomes than a large majority of their neighboring counterpart. This can be avoided by using the measure of income at various percentiles of the population rather than a highly relative and controversial overall income inequality measure.

At first life was a struggle for existence; now, for a standard of living; next it will be for quality of thinking, the coming earthly goal of human existence.[1]