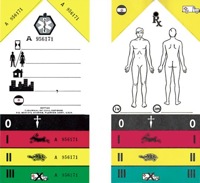 Triage (pronounced /ˈtriɑʒ/) is a process of prioritizing patients based on the severity of their condition. This rations patient treatment efficiently when resources are insufficient for all to be treated immediately. The term comes from the French verb trier, meaning to separate, sort, sift or select.[1] There are two types of triage: simple and advanced.[2] The outcome may result in determining the order and priority of emergency treatment, the order and priority of emergency transport, or the transport destination for the patient, based upon the special needs of the patient or the balancing of patient distribution in a mass-casualty setting.

Note: Triage has multiple meanings: The term may also refer to the allocation of space on a priority basis for patients arriving at the emergency department, or to nurse-driven telephone medical advice systems,[3] among others. This article deals with the concept of triage as it occurs in medical emergencies, including the pre-hospital setting, disasters, and during emergency room treatment.

Triage originated and was first formalized in World War I by French doctors treating the battlefield wounded at the aid stations behind the front. Much is owed to the work of Dominique Jean Larrey during the Napoleonic Wars. Historically, there has been a broad range of attempts to triage patients, and differing approaches and patient tagging systems used in a variety of different countries. Triage has, in fact, existed for a very long time, albeit without a particular appellation applied to the practice. Until recently, triage results, whether performed by a paramedic or anyone else, were frequently a matter of the 'best guess', as opposed to any real or meaningful assessment.[4] In fact, triaging used to be taught with an emphasis on the speed of the function, rather than the accuracy of the outcome. At its most primitive, those responsible for the removal of the wounded from a battlefield or their care afterwards have always divided victims into three basic categories:

For many Emergency medical services (EMS) systems, a similar model can sometimes still be applied. Once a full response has occurred and many hands are available, virtually every paramedic will use the model included in their service policy and standing orders. In the earliest stages of an incident, however, when there are one or two paramedics and twenty or more patients, sheer practicality demands that the above model will be used. As in virtually all aspects of EMS, there are times when 'back to basics' is the only approach that will be effective.

Modern approaches to triage are more scientific. The outcome and grading of the victim is frequently the result of physiological] and assessment findings. Some models, such as the START model, are committed to memory, and may even be algorithm-based. As triage concepts become more sophisticated, triage guidance is also evolving into both software and hardware decision support products for use by caregivers in both hospitals and the field.[6][1]