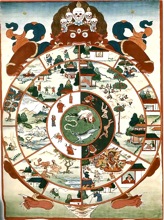 b : bicycle
c : any of many revolving disks or drums used as gambling paraphernalia
d : potter's wheel
e : steering wheel

b : a recurring course, development, or action : cycle

b : a rotation or turn usually about an axis or center; specifically : a turning movement of troops or ships in line in which the units preserve alignment and relative positions as they change direction

b : a directing or controlling force
c : a person of importance especially in an organization <a big wheel>

A wheel is a circular device that is capable of rotating on an axle through its center, facilitating movement or transportation while supporting a load (mass), or performing labour in machines. Common examples are found in transport applications. A wheel, together with an axle overcomes friction by facilitating motion by rolling. In order for wheels to rotate, a moment needs to be applied to the wheel about its axis, either by way of gravity, or by application of another external force. More generally the term is also used for other circular objects that rotate or turn, such as a ship's wheel, steering wheel and flywheel.

Evidence of wheeled vehicles appears from the mid 4th millennium BCE, near-simultaneously in Mesopotamia, the Northern Caucasus (Maykop culture) and Central Europe, and so the question of which culture originally invented the wheeled vehicle remains unresolved and under debate. The earliest well-dated depiction of a wheeled vehicle (here a wagon—four wheels, two axles), is on the Bronocice pot, a ca. 3500–3350 BCE clay pot excavated in a Funnelbeaker culture settlement in southern Poland.

The wheeled vehicle from the area of its first occurrence (Mesopotamia, Caucasus, Balkans, Central Europe) spread across Eurasia, reaching the Indus Valley by the 3rd millennium BCE. During the 2nd millennium BCE, the spoke-wheeled chariot spread at an increased pace, reaching both China and Scandinavia by 1200 BCE. In China, the wheel was certainly present with the adoption of the chariot in ca. 1200 BCE,[6] although Barbieri-Low argues for earlier Chinese wheeled vehicles, circa 2000 BCE.

Although they did not develop the wheel proper, the Olmec and certain other western hemisphere cultures seem to have approached it, as wheel-like worked stones have been found on objects identified as children's toys dating to about 1500 BCE.[8] Early antiquity Nubians used wheels for spinning pottery and waterwheels. It is thought that Nubian waterwheels may have been ox-driven[11] It is also known that Nubians used horse-driven chariots imported from Egypt.

The invention of the wheel thus falls in the late Neolithic, and may be seen in conjunction with the other technological advances that gave rise to the early Bronze Age. Note that this implies the passage of several wheel-less millennia even after the invention of agriculture and of pottery.[1]