Difference between revisions of "Circus" 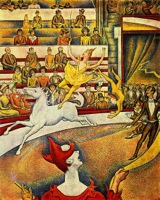 Circus derives from Latin "circus", which is the romanization of the Greek "κίρκος" (kirkos), itself a metathesis of the Homeric Greek "κρίκος" (krikos), meaning "circle" or "ring".

b : a public spectacle

b : a circus performance
c : the physical plant, livestock, and personnel of such a circus
d : something suggestive of a circus (as in frenzied activity, sensationalism, theatricality, or razzle-dazzle) <a media circus>

b British : a usually circular area at an intersection of streets

A circus is commonly a traveling company of performers that may include clowns, acrobats, trained animals, trapeze acts, musicians, hoopers, tightrope walkers, jugglers, unicyclists and other stunt-oriented artists. The word also describes the performance that they give, which is usually a series of acts that are told how to play music and introduced by a "ringmaster". A traditional circus performance is normally held in a ring 13m (42ft) in diameter. This dimension was adopted by Philip Astley to enable a horse rider to stand upright on a cantering horse to perform a series of acrobatic manoeuvres and to more easily retain their balance. Most modern circuses have a system of tiered seating around the ring for the public and since the late 19th early 20th century the performance has taken place under canvas and more recently plastic tents commonly called "The Big Top" .[1]