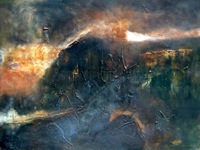 b : intellectual or moral depths

Abyss refers to a bottomless pit, to the underworld, to the deepest ocean floor, or to hell.

In the Septuagint, or Greek version of the Hebrew Bible, the word represents both the original chaos (Genesis 1:2) and the Hebrew tehom ("a surging water-deep"), which is used also in apocalyptic and kabbalistic literature and in the New Testament for hell; the place of punishment; in the Revised (not the Authorized) version of the Bible "abyss" is generally used for this idea. Primarily in the Septuagint cosmography the word is applied both to the waters under the earth which originally covered it, and from which the springs and rivers are supplied and to the waters of the firmament which were regarded as closely connected with those below.

In the parable of Lazarus there is an abyss between the righteous dead and the wicked dead in Sheol.

Revelation 9:11 states that the destroying angel shall arise out of the abyss during the end times.