From Nordan Symposia
(Redirected from Attachments)
Jump to navigationJump to search 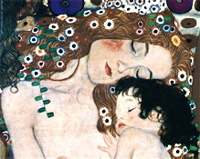 b : affectionate regard <a deep attachment to nature>

For lessons on the related topic of Detachment, follow this link.

Attachment theory describes the dynamics of long-term relationships between humans. Its most important tenet is that an infant needs to develop a relationship with at least one primary caregiver for social and emotional development to occur normally. Attachment theory explains how much the parents' relationship with the child influences development. Attachment theory is an interdisciplinary study encompassing the fields of psychological, evolutionary, and ethological theory. Immediately after World War II, homeless and orphaned children presented many difficulties, and psychiatrist and psychoanalyst John Bowlby was asked by the UN to write a pamphlet on the issue which he entitled maternal deprivation. Attachment theory grew out of his subsequent work on the issues raised.

Infants become attached to individuals who are sensitive and responsive in social interactions with them, and who remain as consistent caregivers for some months during the period from about six months to two years of age. When an infant begins to crawl and walk they begin to use attachment figures (familiar people) as a secure base to explore from and return to. Caregivers' responses lead to the development of patterns of attachment; these, in turn, lead to internal working models which will guide the individual's perceptions, emotions, thoughts and expectations in later relationships. Separation anxiety or grief following the loss of an attachment figure is considered to be a normal and adaptive response for an attached infant. These behaviours may have evolved because they increase the probability of survival of the child.

Research by developmental psychologist Mary Ainsworth in the 1960s and 70s reinforced the basic concepts, introduced the concept of the "secure base" and developed a theory of a number of attachment patterns in infants: secure attachment, avoidant attachment and anxious attachment. A fourth pattern, disorganized attachment, was identified later.

In the 1980s, the theory was extended to attachment in adults. Other interactions may be construed as including components of attachment behaviour; these include peer relationships at all ages, romantic and sexual attraction and responses to the care needs of infants or the sick and elderly.

In the early days of the theory, academic psychologists criticized Bowlby, and the psychoanalytic community ostracised him for his departure from psychoanalytical tenets; however, attachment theory has since become "the dominant approach to understanding early social development, and has given rise to a great surge of empirical research into the formation of children's close relationships". Later criticisms of attachment theory relate to temperament, the complexity of social relationships, and the limitations of discrete patterns for classifications. Attachment theory has been significantly modified as a result of empirical research, but the concepts have become generally accepted. Attachment theory has formed the basis of new therapies and informed existing ones, and its concepts have been used in the formulation of social and childcare policies to support the early attachment relationships of children.

Within attachment theory, attachment means an affectional bond or tie between an individual and an attachment figure (usually a caregiver). Such bonds may be reciprocal between two adults, but between a child and a caregiver these bonds are based on the child's need for safety, security and protection, paramount in infancy and childhood. The theory proposes that children attach to carers instinctively, for the purpose of survival and, ultimately, genetic replication. The biological aim is survival and the psychological aim is security. Attachment theory is not an exhaustive description of human relationships, nor is it synonymous with love and affection, although these may indicate that bonds exist. In child-to-adult relationships, the child's tie is called the "attachment" and the caregiver's reciprocal equivalent is referred to as the "care-giving bond".

Infants form attachments to any consistent caregiver who is sensitive and responsive in social interactions with them. The quality of the social engagement is more influential than the amount of time spent. Although the biological mother is usually the principal attachment figure, the role can be taken by anyone who consistently behaves in a "mothering" or caregiving way over a period of time. In attachment theory, this means a set of behaviours that involves engaging in lively social interaction with the infant and responding readily to signals and approaches. Fathers or any other individuals, are equally likely to become principal attachment figures if they provide most of the child care and related social interaction.

Attachment theory proposes that the quality of caregiving from at least the primary carer is key to attachment security or insecurity. In addition to longitudinal studies, there has been psychophysiological research on the biology of attachment. Research has begun to include behaviour genetics and temperament concepts. Generally, temperament and attachment constitute separate developmental domains, but aspects of both contribute to a range of interpersonal and intrapersonal developmental outcomes. Some types of temperament may make some individuals susceptible to the stress of unpredictable or hostile relationships with caregivers in the early years. In the absence of available and responsive caregivers it appears that some children are particularly vulnerable to developing attachment disorders.

In psychophysiological research on attachment, the two main areas studied have been autonomic responses, such as heart rate or respiration, and the activity of the hypothalamic–pituitary–adrenal axis. Infants' physiological responses have been measured during the Strange Situation procedure looking at individual differences in infant temperament and the extent to which attachment acts as a moderator. There is some evidence that the quality of caregiving shapes the development of the neurological systems which regulate stress.

Another issue is the role of inherited genetic factors in shaping attachments: for example one type of polymorphism of the DRD2 dopamine receptor gene has been linked to anxious attachment and another in the 5-HT2A serotonin receptor gene with avoidant attachment. This suggests that the influence of maternal care on attachment security is not the same for all children. One theoretical basis for this is that it makes biological sense for children to vary in their susceptibility to rearing influence.[1]