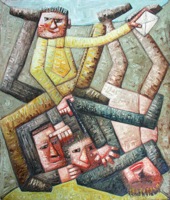 b : an administrative policy-making group

The purpose of a bureaucracy is to successfully implement the actions of an organization of any size (but often associated with large entities such as government, corporations, and non-governmental organizations), in achieving its purpose and mission, and the bureaucracy is tasked to determine how it can achieve its purpose and mission with the greatest possible efficiency and at the least cost of any resources.

Modern bureaucracies arose as the government of states grew larger during the modern period, and especially following the Industrial Revolution. As the authors David Osborne and Ted Gaebler pointed out in 1993:

It is hard to imagine today, but a hundred years ago bureaucracy meant something positive. It connoted a rational, efficient method of organization – something to take the place of the arbitrary exercise of power by authoritarian regimes. Bureaucracy brought the same logic to government work that the assembly line brought to the factory. With the hierarchical authority and functional a specialization, they made possible the efficient undertaking of large complex tasks.– Osborne, David and Gaebler, Ted. Reinventing Government

Max Weber described many ideal types of public administration and government in his magnum opus Economy and Society (1922). His critical study of the bureaucratisation of society became one of the most enduring parts of his work. It was Weber who began the studies of bureaucracy and whose works led to the popularization of this term. Many aspects of modern public administration go back to him, and a classic, hierarchically organized civil service of the Continental type is called "Weberian civil service". As the most efficient and rational way of organizing, bureaucratization for Weber was the key part of the rational-legal authority, and furthermore, he saw it as the key process in the ongoing rationalization of the Western society.

Weber listed several precondititions for the emergence of the bureaucracy. The growth in space and population being administered and the growth in complexity of the administrative tasks being carried out and the existence of a monetary economy resulted in a need for a more efficient administrative system. Development of communication and transportation technologies made more efficient administration possible but also in popular demand, and democratization and rationalization of culture resulted in demands that the new system treats everybody equally.

Weber's ideal bureaucracy is characterized by hierarchical organization, delineated lines of authority in a fixed area of activity, action taken on the basis of and recorded in written rules, bureaucratic officials need expert training, rules are implemented by neutral officials, career advancement depends on technical qualifications judged by organization, not individuals.

While recognizing bureaucracy as the most efficient form of organization, and even indispensable for the modern state, Weber also saw it as a threat to individual freedoms, and the ongoing bureaucratization as leading to a "polar night of icy darkness", in which increasing rationalization of human life traps individuals in the aforementioned "iron cage" of bureaucratic, rule-based, rational control. In order to counteract bureaucrats, the system needs entrepreneurs and politicians.