From Nordan Symposia
(Redirected from Contemplate)
Jump to navigationJump to search 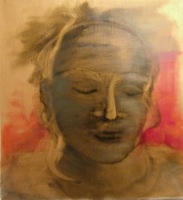 b : a state of mystical awareness of God's being

For lessons on the related topic of Stillness, follow this link.

The word contemplation comes from the Latin root templum (from Greek temnein: to cut or divide). It means separating something from its environment and enclosing it in a sector. Contemplation is the Latin translation of Greek 'theory' (theoria). In a religious sense it is usually a type of prayer or meditation.

In Eastern Christianity contemplation or theoria literally means to see God or to have the Vision of God.[3] As a technique, theoria is expressed by the ascetic tradition of Hesychasm. Hesychasm is continuous prayer that is to focus with absolute sincerity, and to repeat in prayer, as a means to focus exclusively on the Triune God. It is to reconcile the heart and the mind into one thing (see nous).[4] Contemplation in Eastern Orthodoxy is expressed in degrees as those covered in St John Climacus' Ladder of Divine Ascent. The process of changing from the old man of sin into the new born child of God and into our true nature as good and divine is called theosis. Each of these components are critical to the cultivation of theoria. One derives Spiritual Knowledge from theoria. One however can not derive theoria from spiritual knowledge. This is to say that once someone is in the presence of God then they can begin to properly understand and there "contemplate" God. This form of contemplation is to have and pass through an actual experience rather than a scientific understanding of theory. Whereas in science one uses theory to understand the natural world and its operations, one does the reverse with God. In science contemplation means one derives a explanation and then tests the "theory" (see gnosiology). Within the realm of Eastern Christianity theory is faith and one at first cultivates the virtues as an expression of faith. Once the virtues are cultivated the highest virtue is humility. Through humility one becomes Holy. God is humility and one becomes like God. This is the contemplation (living) of God. The Holy Wisdom of God is not knowledge but humility.

Within Western Christianity contemplation is often related to mysticism as expressed in the works of mystical theologians such as Teresa of Avila and John of the Cross as well as the writings of Margery Kempe, Augustine Baker and Thomas Merton.

Contemplation as a practice is finding greater resonance in the West both in business - for example in Peter Senge's book The Fifth Discipline: The Art and Practice of the Learning Organization[6] - and in universities in fields as diverse as architecture, physics, and the liberal arts.

In Catholic Christianity, contemplation is given importance. The Catholic Church's "model theologian," St. Thomas Aquinas wrote: "It is requisite for the good of the human community that there should be persons who devote themselves to the life of contemplation." One of his disciples, Josef Pieper commented: "For it is contemplation which preserves in the midst of human society the truth which is at one and the same time useless and the yardstick of every possible use; so it is also contemplation which keeps the true end in sight, gives meaning to every practical act of life."[7]