From Nordan Symposia
(Redirected from Criminal)
Jump to navigationJump to search 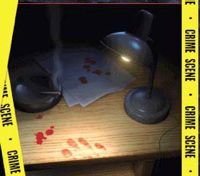 Middle English, from Anglo-French, from Latin crimen accusation, reproach, crime; probably akin to Latin cernere to sift, determine; Latin crīmen (genitive: criminis), from the root of Latin cernō = "I decide, I give judgement" and Greek κρινω = "I judge".

For lessons on the topic of Crime, follow this link.

Crime is the breach of rules or laws for which some governing authority (via mechanisms such as police power) ultimately prescribes a conviction. Individual human societies may each define crime and crimes differently. While every crime violates the law, not every violation of the law counts as a crime; for example: breaches of contract and of other civil law may rank as "offences" or as "infractions".

When informal relationships and sanctions prove insufficient to establish and maintain a desired social order, a government or a sovereign state may impose more formalized or stricter systems of social control. With institutional and legal machinery at their disposal, agents of the State can compel populations to conform to codes, and can opt to punish or to attempt to reform those who do not conform.

Authorities employ various mechanisms to regulate (encouraging or discouraging) certain behaviors in general. Governing or administering agencies may for example codify rules into laws, police citizens and visitors to ensure that they comply with those laws, and implement other policies and practices designed to prevent crime. In addition, authorities provide remedies and sanctions, and collectively these constitute a criminal justice system. Legal sanctions vary widely in their severity, they may include (for example) incarceration of temporary character aimed at reforming the convict. Some jurisdictions have penal codes written to inflict permanent harsh punishments: legal mutilation, capital punishment or life without parole.

The label of "crime" and the accompanying social stigma normally confine their scope to those activities seen as injurious to the general population or to the State, including some that cause serious loss or damage to individuals. Those who apply the labels of "crime" or "criminal" intend to assert the hegemony of a dominant population, or to reflect a consensus of condemnation for the identified behavior and to justify any punishments prescribed by the State (in the event that standard processing tries and convicts an accused person of a crime).[1]