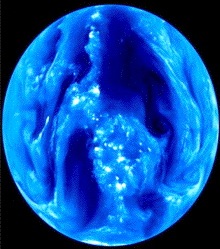 Feedback describes the situation when output from (or information about the result of) an event or phenomenon in the past will influence the same event/phenomenon in the present or future. When an event is part of a chain of cause-and-effect that forms a circuit or loop, then the event is said to "feed back" into itself.

Feedback is also a synonym for:

Feedback is a mechanism, process or signal that is looped back to control a system within itself. Such a loop is called a feedback loop. Intuitively many systems have an obvious input and output; feeding back part of the output so as to increase the input is positive feedback; feeding back part of the output in such a way as to partially oppose the input is negative feedback. In more general terms, a control system has input from an external signal source and output to an external load; this defines a natural sense (or direction) or path of propagation of signal; the feedforward sense or path describes the signal propagation from input to output; feedback describes signal propagation in the reverse sense. When a sample of the output of the system is fed back, in the reverse sense, by a distinct feedback path into the interior of the system, to contribute to the input of one of its internal feedforward components, especially an active device or a substance that is consumed in an irreversible reaction, it is called the "feedback". The propagation of the signal around the feedback loop takes a finite time because it is causal.

The natural sense of feedforward is defined chemically by some irreversible reaction, or electronically by an active circuit element that has access to an auxiliary power supply, so as to be able to provide power gain to amplify the signal as it propagates from input to output. For example, an amplifier can use power from its controlled power reservoir, such as its battery, to provide power gain to amplify the signal; but the reverse is not possible: the signal cannot provide power to re-charge the battery of the amplifier. Feedforward, feedback and regulation are self related. The feedforward carries the signal from source to load.

Negative feedback helps to maintain stability in a system in spite of external changes. It is related to homeostasis. For example, in a population of foxes (predators) and rabbits (prey), an increase in the number of foxes will cause a reduction in the number of rabbits; the smaller rabbit population will sustain fewer foxes, and the fox population will fall back. In an electronic amplifier feeding back a negative copy of the output to the input will tend to cancel distortion, making the output a more accurate replica of the input signal.

Positive feedback amplifies possibilities of divergences (evolution, change of goals); it is the condition to change, evolution, growth; it gives the system the ability to access new points of equilibrium. For example, in an organism, most positive feedback provide for fast autoexcitation of elements of endocrine and nervous systems (in particular, in stress responses conditions) and are believed to play a key role in morphogenesis, growth, and development of organs, all processes which are in essence a rapid escape from the initial state. Homeostasis is especially visible in the nervous and endocrine systems when considered at organism level. Chemical potential energy for irreversible reactions or electrical potential energy for irreversible cell-membrane current powers the feedforward sense of the process. However, in the case of morphogenesis, feedback may only be enough to explain the increase in momentum of the system, and may not be sufficient in itself to account for the movement or direction of its parts.

When a public-address system is used with a microphone to amplify speech, the output from a random sound at the microphone may produce sound at a loudspeaker which reaches the microphone such as to reinforce and amplify the original signal (positive feedback), building up to a howl (of frequency dependent upon the acoustics of the hall). A similar process is used deliberately to produce oscillating electrical signals.

When feedback modifies an event/phenomenon, the modification will subsequently influence the feedback signal in one of three ways:

Note that an increase or decrease of the feedback signal here refers to the magnitude of the signal's absolute value, without regard to the polarity or sign of the signal. For example a change in signal value from +5 to +10 or from -3 to -6 are both considered to be increasing.

Positive feedback, which seeks to increase the event that caused it, as in a nuclear chain-reaction, is also known as a self-reinforcing loop.[1] An event influenced by positive feedback will increase or decrease its output/activation until it hits a limiting constraint. Such a constraint may be destructive, as in thermal runaway or a nuclear chain reaction. Self-reinforcing loops can be a smaller part of a larger balancing loop, especially in biological systems such as regulatory circuits.

Negative feedback, which seeks to reduce the feedback signal that caused it, is also known as a self-correcting or balancing loop.[1] Such loops tend to be goal-seeking, as in a thermostat which compares actual temperature with desired temperature and seeks to reduce the difference. Balancing loops are sometimes prone to hunting: an oscillation caused by an excessive or delayed feedback signal, resulting in over-correction.

The terms negative and positive feedback can be used loosely or colloquially to describe or imply criticism and praise, respectively. This may lead to confusion with the more technically accurate terms positive and negative reinforcement, which refer to something that changes the likelihood of a future behaviour.

Negative feedback was applied by Harold Stephen Black to electrical amplifiers in 1927, but he could not get his idea patented until 1937.[2] Arturo Rosenblueth, a Mexican researcher and physician, co-authored a seminal 1943 paper Behavior, Purpose and Teleology[3] that, according to Norbert Wiener (another co-author of the paper), set the basis for the new science cybernetics. Rosenblueth proposed that behaviour controlled by negative feedback, whether in animal, or machine, was a determinative, directive principle in nature and human creations.[citation needed]. This kind of feedback is studied in cybernetics and control theory.[1]