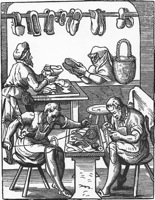 A guild is an association of craftsmen in a particular trade. The earliest guilds were formed as confraternities of workers. They were organized in a manner something between a trade union, a cartel and a secret society. They often depended on grants of letters patent by an authority or monarch to enforce the flow of trade to their self-employed members, and to retain ownership of tools and the supply of materials. A lasting legacy of traditional guilds are the guildhalls constructed and used as meeting places.

Fall of the guilds

Despite its advantages for agricultural and artisan producers, the guild became a target of much criticism towards the end of the 1700s and the beginning of the 1800s. They were believed to oppose free trade and hinder technological innovation, technology transfer and business development. According to several accounts of this time, guilds became increasingly involved in simple territorial struggles against each other and against free practitioners of their arts.

Two of the most outspoken critics of the guild system were Jean-Jacques Rousseau and Adam Smith, and all over Europe a tendency to oppose government control over trades in favour of laissez-faire free market systems was growing rapidly and making its way into the political and legal system. Karl Marx in his Communist Manifesto also criticized the guild system for its rigid gradation of social rank and the relation of oppressor/oppressed entailed by this system. From this time comes the low regard in which some people hold the guilds to this day. For example, Smith writes in The Wealth of Nations (Book I, Chapter X, paragraph 72):

It is to prevent this reduction of price, and consequently of wages and profit, by restraining that free competition which would most certainly occasion it, that all corporations, and the greater part of corporation laws, have been established. (...) and when any particular class of artificers or traders thought proper to act as a corporation without a charter, such adulterine guilds, as they were called, were not always disfranchised upon that account, but obliged to fine annually to the king for permission to exercise their usurped privileges.

In part due to their own inability to control unruly corporate behavior, the tide turned against the guilds.

Because of industrialization and modernization of the trade and industry, and the rise of powerful nation-states that could directly issue patent and copyright protections — often revealing the trade secrets — the guilds' power faded. After the French Revolution they fell in most European nations through the 1800s, as the guild system was disbanded and replaced by free trade laws. By that time, many former handicraft workers had been forced to seek employment in the emerging manufacturing industries, using not closely guarded techniques but standardized methods controlled by corporations.[1]