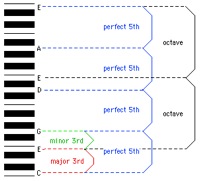 b : difference in pitch between tones

In music theory, an interval is a combination of two notes, or the ratio between their frequencies. Two-note combinations are also called dyads. Although chords are often defined as sets of three or more notes, intervals are sometimes considered to be the simplest kind of chord.

Intervals may be described as:

Vertical or harmonic, if the two notes sound simultaneously
Horizontal, linear, or melodic if they sound successively.

In Western culture, the most common method to classify and name intervals is based on their quality (perfect, major, minor, etc.) and number (unison, second, third, etc.). For instance, two frequently used types of interval are called minor third and major third. Intervals may be also classified as:

Minute intervals (commas, and microtones) can be formed by the notes of musical scales containing more than 12 pitches (e.g., by the notes A♭ and G♯ found in some extended scales), or by two notes having the same name, but tuned a different way (e.g., the syntonic comma is sometimes defined as the difference between an F♯ tuned using the D-based Pythagorean system, and another F♯ tuned using the D-based quarter-comma meantone system). They are sometimes so small that the difference in pitch between the two notes cannot be perceived.[1]