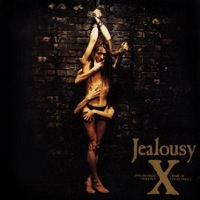 Jealousy is an emotion whose effects “frequently get out of control” (Goldie, 2000, p. 229). It is a common observation that the experience of jealousy can last much longer than the one of a basic emotion like anger, without losing its original intensity, and, in a paradox captured in Rochefoucauld's maxim, it may outlast the attachment which it fears losing: "jealousy is always born with love; it does not always die with it."

The word stems from the French jalousie, formed from jaloux (jealous), and further from Low Latin zelosus (full of zeal), in turn from the Greek word ζήλος (zēlos), sometimes "jealousy", but more often in a good sense "emulation, ardour, zeal" [9][10] (with a root connoting "to boil, ferment"; or "yeast").

The color green is often associated with jealousy and envy, which is where the expressions "green with envy" , and "green-eyed monster" come from.

For lessons on the topic of Jealousy, follow this link.

People do not express jealousy through a single emotion or a single behavior.[11][12][13] They instead express jealousy through diverse emotions and behaviors, which makes it difficult to form a scientific definition of jealousy. Scientists still do not have a universally agreed upon definition of jealousy. They instead define jealousy in their own words, as illustrated by the following examples:

Popular culture uses the word jealousy as a synonym for envy. Many dictionary definitions include a reference to envy or envious feelings. In fact, the overlapping use of jealousy and envy has a long history.

"The terms are used indiscriminately in such popular 'feelgood' books as Nancy Friday's Jealousy, where the expression 'jealousy' applies to a broad range of passions, from envy to lust and greed. While this kind of usage blurs the boundaries between categories that are intellectually valuable and psychologically justifiable, such confusion is understandable in that historical explorations of the term indicate that these boundaries have long posed problems. Margot Grzywacz's fascinating etymological survey of the word in Romance and Germanic languages asserts, indeed, that the concept was one of those that proved to be the most difficult to express in language and was therefore among the last to find an unambiguous term. Classical Latin used invidia, without strictly differentiating between envy and jealousy. It was not until the postclassical era that Latin borrowed the late and poetic Greek word zelotypia and the associated adjective zelosus. It is from this adjective that are derived French jaloux, Provencal gelos, Italian geloso, and Spanish celoso. (Lloyd, 1995, page 4)[19]

Perhaps the overlapping use of jealousy and envy occurs because people can experience both at the same time. A person may envy the characteristics or possessions of someone who also happens to be a romantic rival.[20] In fact, one may even interpret romantic jealousy as a form of envy.[21] A jealous person may envy the affection that his or her partner gives to a rival--affection the jealous person feels entitled to himself or herself. People often use the word jealousy as a broad label that applies to both experiences of jealousy and experiences of envy.[22]

Although popular culture often uses jealousy and envy as synonyms, modern philosophers and psychologists have argued for conceptual distinctions between jealousy and envy. For example, philosopher John Rawls[23] distinguishes between jealousy and envy on the ground that jealousy involves the wish to keep what one has, and envy the wish to get what one does not have. Thus, a child is jealous of her parents' attention to a sibling, but envious of her friend's new bicycle. Psychologists Laura Guerrero and Peter Andersen have proposed the same distinction.[24] They claim the jealous person "perceives that he or she possesses a valued relationship, but is in danger of losing it or at least of having it altered in an undesirable manner," whereas the envious person "does not possess a valued commodity, but wishes to possess it." Gerrod Parrot draws attention to the distinct thoughts and feelings that occur in jealousy and envy.[20][25][26]

Parrot acknowledges that people can experience envy and jealousy at the same time. Feelings of envy about a rival can even intensify the experience of jealousy. [27] Still, the differences between envy and jealousy in terms of thoughts and feelings justify their distinction in philosophy and science. However, we are Jealous of a rival, while we are Envious of what other people have.

Jealousy involves an entire “emotional episode,” including a complex “narrative,”: the circumstances that lead up to jealousy, jealousy itself as emotion, any attempt at self regulation, subsequent actions and events and the resolution of the episode (Parrott, 2001, p. 306). The narrative can originate from experienced facts, thoughts, perceptions, memories, but also imagination, guess and assumptions. The more society and culture matter in the formation of these factors, the more jealousy can have a social and cultural origin. By contrast, Goldie (2000, p. 228) shows how jealousy can be a “cognitively impenetrable state”, where education and rational belief matter very little.

One possible explanation of the origin of jealousy in evolutionary psychology is that the emotion evolved in order to maximize the success of our genes: it is a biologically based emotion (Prinz after Buss and Larsen, 2004, p. 120) selected to foster the certainty about the paternity of one’s own offspring. A jealous behavior, in men, is directed into avoiding sexual betrayal and a consequent waste of resources and effort in taking care of someone else’s offspring. There are, additionally, cultural or social explanations of the origin of jealousy. According to one, the narrative from which jealousy arises can be in great part made by the imagination. Imagination is strongly affected by the culture a person lives within. The pattern of reasoning, the way one perceives situations, depends strongly on cultural context.

While mainstream psychology considers sexual arousal through jealousy a paraphilia, some authors on sexuality (Serge Kreutz, Instrumental Jealousy) have argued that jealousy in manageable dimensions can have a definite positive effect on sexual function and sexual satisfaction. Studies have also shown that jealousy sometimes heightens passion towards partners and increases the intensity of passionate sex.[28][29]

Jealousy in children and teenagers has been observed more often in those with low self-esteem and can evoke aggressive reactions. One such study suggested that developing intimate friends can be followed by emotional insecurity and loneliness in some children when those intimate friends interact with others. Jealousy linked to agression and low self-esteem

Anthropologists have claimed that jealousy varies across cultures. Cultural learning can influence the situations that trigger jealousy and the manner in which jealousy is expressed. Attitudes toward jealousy can also change within a culture over time. For example, attitudes toward jealousy changed substantially during the 1960s and 1970s in the United States. People in the United States adopted much more negative views about jealousy.

Artistic depictions of jealousy occur in fiction, films, and other art forms such as painting and sculpture. Jealousy is the powerful complex of emotions experienced at the loss, real or imagined, of something or someone you believe is yours, whereas envy concerns what you do not have and would like to possess. In Shakespeare's play Othello, the title character is filled with jealousy at the thought of losing his beloved Desdemona: his General, Iago, is consumed with envy of Othello’s prestige. Because jealous lovers tell multiple stories about those who arouse their jealousy, and because the emotion is so corrosive, jealousy is a common theme in literature, art, theatre, and film.