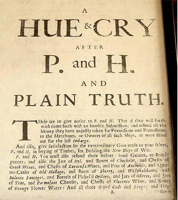 Middle French Pamphilet, a familiar name of the 12th-century Latin amatory poem or comedy Pamphilus, seu de Amore (1373–1424 in a catalogue of manuscripts in the Library of the Louvre; c1245 in Old French as Panfilès) post-classical Latin Pamphilus, personal name (ancient Greek Πάμϕιλος, lit. ‘beloved of all’) + Middle French -et-et suffix1. The extended sense is apparently not attested in Middle French, but does occur in post-classical Latin in British sources: panfletus (1344), paunflettus (1388), pamfletus (?a1400), all in sense ‘short treatise’.

The amatory poem of Pamphilus was extremely popular in the Middle Ages and was translated into French and other vernaculars: see W. Blumenthal in Mittellat. Jahrb. (1976) 11 245–311 and the critical edition by F. G. Becker (1972). With the familiar French name Pamphilet compare the familiar names of other small works similarly formed with French -et suffix, e.g. Old French Chatonez, Chatonnet the Distichs of (pseudo-) Cato, Isopet the Fables of Aesop.

The poem is mentioned as Panflet in the Middle Dutch Floris ende Blancefloer of Diederik van Assenede (c1260) I. 333, where it is said of the hero and heroine ‘Ende mense oec te lesene sette In Juvenale ende in Panflette, Ende in Ovidio de Arte Amandi’ (And they were set also to read In Juvenal and in Panflet, And in Ovid's ‘Art of Loving’). As to its popularity, the students of the University of Paris were rebuked because they preferred this erotic production to more edifying reading. The poem was also well known in England and is mentioned or alluded to in Chaucer, Gower, and Skelton: see P. Bawcutt in Medium Ævum (1995) 64 264–72.

A pamphlet is an unbound booklet (that is, without a hard cover or binding). It may consist of a single sheet of paper that is printed on both sides and folded in half, in thirds, or in fourths (called a leaflet), or it may consist of a few pages that are folded in half and saddle stapled at the crease to make a simple book. In order to count as a pamphlet, UNESCO requires a publication (other than a periodical) to have "at least 5 but not more than 48 pages exclusive of the cover pages"; a longer item is a book.

Due to their ephemeral nature and to wide array of political or religious perspectives given voice by the format's ease of production, pamphlets are prized by many book collectors. Substantial accumulations have been amassed and transferred to ownership of academic research libraries around the world.

The pamphlet has been widely adopted in commerce, particularly as a format for marketing communications. There are numerous purposes for the pamphlets, such as product descriptions or instructions, corporate information, events promotions or tourism guides and are used in the same way as leaflets, brochures and Z-CARD.