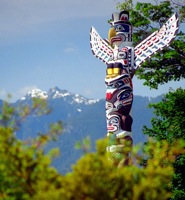 b : a family or clan identified by a common totemic object

A totem is any supposed entity that watches over or assists a group of people, such as a family, clan, or tribe.

Totems support larger groups than the individual person. In kinship and descent, if the apical ancestor of a clan is nonhuman, it is called a totem. Normally this belief is accompanied by a totemic myth.

Although the term is of Ojibwe origin in North America, totemistic beliefs are not limited to Native Americans. Similar totem-like beliefs have been historically present in societies throughout much of the world, including Africa, Asia, Australia, Eastern Europe, Western Europe, and the Arctic polar region.

In modern times, some single individuals, not otherwise involved in the practice of a tribal religion, have chosen to adopt a personal spirit animal helper, which has special meaning to them, and may refer to this as a totem. This non-traditional usage of the term is prevalent in the New Age movement, and the mythopoetic men's movement.

Totemism (derived from the root -oode- in the Ojibwe language, which referred to something kinship-related, c.f. odoodem, "his totem") is a religious belief that is frequently associated with shamanistic religions. The totem is usually an animal or other natural figure that spiritually represents a group of related people such as a clan.

Totemism was a key element of study in the development of 19th and early 20th century theories of religion, especially for thinkers such as Émile Durkheim, who concentrated their study on primitive societies (which was an acceptable description at the time). Drawing on the identification of social group with spiritual totem in Australian aboriginal tribes, Durkheim theorized that all human religious expression was intrinsically founded in the relationship to a group.

In his essay "Le Totemisme aujourdhui" (Totemism Today), the anthropologist Claude Lévi-Strauss argued that human cognition, which is based on analogical thought, is independent of social context. From this, he excludes mathematical thought, which operates primarily through logic. Totems are chosen arbitrarily for the sole purpose of making the physical world a comprehensive and coherent classificatory system. Lévi-Strauss argues that the use of physical analogies is not an indication of a more primitive mental capacity. It is rather, a more efficient way to cope with this particular no mode of life in which abstractions are rare, and in which the physical environment is in direct friction with the society. He also holds that scientific explanation entails the discovery of an "arrangement"; moreover, since "the science of the concrete" is a classificatory system enabling individuals to classify the world in a rational fashion, it is neither more nor less a science than any other in the western world. It is important to recognise that in this text, Lévi-Strauss manifests the egalitarian nature of his work. Lévi-Strauss diverts the theme of anthropology toward the understanding of human cognition.

Lévi-Strauss looked at the ideas of Firth and Fortes, Durkheim, Malinowski, and Evans-Pritchard to reach his conclusions. Firth and Fortes argued that totemism was based on physical or psychological similarities between the clan and the totemic animal. Malinowski proposed that it was based on empirical interest or that the totem was 'good to eat.' In other words, there was rational interest in preserving the species. Finally Evans-Pritchard argued that the reason for totems was metaphoric. His work with the Nuer led him to believe that totems are a symbolic representation of the group. Lévi-Strauss considered Evan-Pritchard's work the correct explanation.[1]