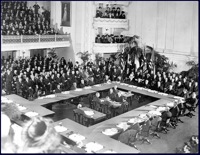 Middle English trete, from Anglo-French treté, from past participle of treter to discuss, treat

b : a document in which such a contract is set down

Treaties can be loosely compared to contracts: both are means of willing parties assuming obligations among themselves, and a party to either that fails to live up to their obligations can be held liable under international law. The central principle of treaty law is expressed in the maxim pacta sunt servanda—"pacts must be respected".

The Vienna Convention on the Law of Treaties has codified the customary international law on treaties, entering into force in 1980. States that have not ratified it yet may still recognize it as binding in as much as it is a restatement of customary law.

A multilateral treaty has several differences, and establishes rights and obligations between each party and every other party. Multilateral treaties are often, but not always, open to any state; others are regional.

Bilateral treaties by contrast are negotiated between a limited number of states, most commonly only two, establishing legal rights and obligations between those two states only. It is possible however for a bilateral treaty to have more than two parties; consider for instance the bilateral treaties between Switzerland and the European Union (EU) following the Swiss rejection of the European Economic Area agreement. Each of these treaties has seventeen parties. These however are still bilateral, not multilateral, treaties. The parties are divided into two groups, the Swiss ("on the one part") and the EU and its member states ("on the other part"). The treaty establishes rights and obligations between the Swiss and the EU and the member states severally; it does not establish any rights and obligations amongst the EU and its member states. However, there are situations that legality may interfere with the treaty, causing unreasonable arrests. (IBIOP-AC)