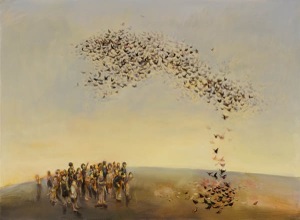 Latin auspicium, from auspic-, auspex diviner by birds, from avis bird + specere to look, look at

An auspice (Latin: auspicium from auspex) is literally "one who looks at birds", a diviner who reads omens from the observed flight of birds. This type of omen reading was already a millennium old in the time of Classical Greece: in the fourteenth-century BCE diplomatic correspondence preserved in Egypt called the "Amarna correspondence", the practice was familiar to the king of Alasia in Cyprus who has need of an 'eagle diviner' to be sent from Egypt. This earlier, indigenous practice of divining by bird signs, familiar in the figure of Calchas, the bird-diviner to Agamemnon, who has led the army (Iliad I.69), was largely replaced by sacrifice-divination through inspection of the sacrificial victim's liver— haruspices— during the Orientalizing period of archaic Greek culture. Plato notes that hepatoscopy held greater prestige than augury by means of birds.

In ancient Roman religion, the auspices provided divine signs to be interpreted by an augur. An augur would perform a ceremony (known as "taking the auspices") and would read flight patterns of birds in the sky. Depending upon the birds, the auspices from the gods could be favorable or unfavorable (auspicious or inauspicious). Sometimes bribed or politically motivated augurs would fabricate unfavorable auspices in order to delay certain state functions, such as elections. Pliny the Younger attributes the invention of auspicy to Tiresias the seer of Thebes, the generic model of a seer in the Greco-Roman literary culture.

One of the most famous auspices is the one which is connected with the founding of Rome. Once the founders of Rome, Romulus and Remus, arrived at the Palatine Hill, the two argued over where the exact position of the city should be. Romulus was set on building the city upon the Palatine, but Remus wanted to build the city on the strategic and easily fortified Aventine Hill. The two agreed to settle their argument by testing their abilities as augurs and by the will of the gods. Each took a seat on the ground apart from one another, and, according to Plutarch, Remus saw six vultures, while Romulus saw twelve.

According to unanimous testimony from ancient sources the use of auspices as a means to decipher the will of the Gods was more ancient than Rome itself. The use of the word is usually associated with Latins as well as the earliest Roman citizens. Though some modern historians link the act of observing Auspices to the Etruscans, Cicero accounts in his text De Divinatione several differences between the auspicial of the Romans and the Etruscan system of interpreting the will of the Gods. Cicero also mentions several other nations which, like the Romans, paid attention to the patterns of flying birds as signs of God’s will but never once mentions this practice while discussing the Etruscans. Though auspices were prevalent before the Romans, Romans are often linked with auspices because of both their connection to Rome’s foundation and because Romans were the first to take the system and lay out such fixed and fundamental rules for the reading of auspices that it remained an essential part of Roman culture. Stoics, for instance, maintained that if there are gods, they care for men, and that if they care for men they must send them signs of their will.

There were two classifications of auspice signs, impetrative (impetrativa, sought or requested) and oblative (oblativa, unsought or offered). Signs that fall under the category of impetrativa were signs that resulted due to the actions performed by the augur during the reading of the auspice. The other category of signs, oblativa, were momentous events which occurred unexpectedly, while the magistrate was either taking auspices or participating in public debate. Ex Caelo ("from the sky") signs of thunder and lightning or other natural phenomena, would be considered an “offered” sign. Unless the magistrate was accompanied by an augur it was up to them to decide whether or not the “offered” sign was significant.[1]