From Nordan Symposia
(Redirected from Entanglements)
Jump to navigationJump to search 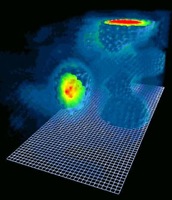 Entanglement, also called the quantum non-local connection, is a property of a quantum mechanical state of a system of two or more objects in which the quantum states of the constituting objects are linked together so that one object can no longer be adequately described without full mention of its counterpart—even if the individual objects are spatially separated in a spacial manner. The property of entanglement was understood in the early days of quantum theory, although not by that name. Quantum entanglement is at the heart of the EPR paradox developed by Albert Einstein, Boris Podolsky, and Nathan Rosen in 1935. This interconnection leads to non-classical correlations between observable physical properties of remote systems, often referred to as nonlocal correlations.

Quantum mechanics holds that observables, for example spin, are indeterminate until some physical intervention is made to measure an observable of the object in question. In the singlet state of two spin, it is equally likely that any given particle will be observed to be spin-up or spin-down. Measuring any number of particles will result in an unpredictable series of measurements that will tend to a 50% probability of the spin being up or down. However, the results are quite different if this experiment is done with entangled particles. For example, when two members of an entangled pair are measured, their spin measurement results will be correlated. Two (out of infinitely many) possibilities are that the spins will be found to always have opposite spins (in the spin-anti-correlated case), or that they will always have the same spin (in the spin-correlated case). Measuring one member of the pair therefore tells you what spin the other member would have if it were also measured. The distance between the two particles is irrelevant.

When pairs of particles are generated by the decay of other particles, naturally or through induced collision, these pairs may be termed "entangled", in that such pairs often necessarily have linked and opposite qualities such as spin or charge. The assumption that measurement in effect "creates" the state of the measured quality goes back to the arguments of Einstein, Podolsky, and Rosen and Erwin Schrödinger concerning Heisenberg's uncertainty principle and its relation to observation (see also the Copenhagen interpretation).

The analysis of entangled particles by means of Bell's theorem can lead to an impression of non-locality, i.e. that there exists a connection between the members of such a pair that defies both classical and relativistic concepts of space and time. This is reasonable if it is assumed that each particle departs the location of the pair's creation in an ambiguous state (thus yet unobserved, as per a possible interpretation of Heisenberg's principle). In such a case, for a given observable quality of the particle, all outcomes remain a possibility and only measurement itself would precipitate a distinct value. As soon as just one of the particles is observed, its entangled pair collapses into the very same state. If each particle departs the scene of its "entangled creation" with properties that would unambiguously determine the value of the quality to be subsequently measured, then the postulated instantaneous transmission of information across space and time would not be required to account for the result of both particles having the same value for that quality. The Bohm interpretation postulates that a guide wave exists connecting what are perceived as individual particles such that the supposed hidden variables are actually the particles themselves existing as functions of that wave. Observation of wavefunction collapse can lead to the impression that measurements performed on one system instantaneously influence other systems entangled with the measured system, even when far apart. Yet another interpretation of this phenomenon is that quantum entanglement does not necessarily enable the transmission of classical information faster than the speed of light because a classical information channel is required to complete the process.[1]

Entanglement is one of the properties of quantum mechanics that caused Einstein and others to dislike the theory. In 1935, Einstein, Podolsky, and Rosen formulated the paradox EPR paradox, a quantum-mechanical thought experiment with a highly counterintuitive and apparently nonlocal outcome, in response to Niels Bohr's advocacy of the belief that quantum mechanics as a theory was complete.[1] Einstein famously derided entanglement as "spukhafte Fernwirkung"[2] or "spooky action at a distance". It was his belief that future mathematicians would discover that quantum entanglement entailed nothing more or less than an error in their calculations. As he once wrote: "I find the idea quite intolerable that an electron exposed to radiation should choose of its own free will, not only its moment to jump off, but also its direction. In that case, I would rather be a cobbler, or even an employee in a gaming house, than a physicist".[3]

Observations pertaining to entangled states appear to conflict with the property of relativity that information cannot be transferred faster than the speed of light. Although two entangled systems appear to interact across large spatial separations, the current state of belief is that no useful information can be transmitted in this way, meaning that causality cannot be violated through entanglement. This is the statement of the no-communication theorem.