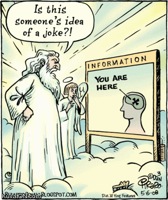 b (1) : the humorous or ridiculous element in something (2) : an instance of jesting : kidding <can't take a joke>
c : practical joke
d : laughingstock

A joke (or gag) is a phrase or a paragraph with a humorous twist. It can be in many different forms, such as a question or short story. To achieve this end, jokes may employ irony, sarcasm, word play and other devices. Jokes may have a punchline that will end the sentence to make it humorous.

A practical joke or prank differs from a spoken one in that the major component of the humour is physical rather than verbal (for example placing salt in the sugar bowl).

Jokes are typically for the entertainment of friends and onlookers. The desired response is generally laughter; when this does not happen the joke is said to have "fallen flat" or "bombed". However, jokes have other purposes and functions, common to comedy/humour/satire in general.

Jokes have been a part of human culture since at least 1900 BC. According to research conducted by Dr Paul McDonald of the University of Wolverhampton, a fart joke from ancient Sumer is currently believed to be the world's oldest known joke. Britain's oldest joke, meanwhile, is a 1,000-year-old double-entendre that can be found in the Codex Exoniensis.

A recent discovery of a document called Philogelos (The Laughter Lover) gives us an insight into ancient humor. Written in Greek by Hierocles and Philagrius, it dates to the third or fourth century AD, and contains some 260 jokes. Considering humor from our own culture as recent as the 19th century is at times baffling to us today, the humor is surprisingly familiar. They had different stereotypes, the absent-minded professor, the eunuch, and people with hernias or bad breath were favourites.[1]