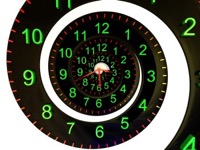 •2: (as modifier real-time) Computing of or relating to a system in which input data is processed within milliseconds so that it is available virtually immediately as feedback, e.g., in a missile guidance or airline booking system: real-time signal processing.

Real time within the media is a method where events are portrayed at the same rate that the audience experiences them. For example, if a movie told in real time is two hours long, then the plot of that movie covers two hours of fictional time. If a daily real-time comic strip runs for six years, then the characters will all be six years older at the end of the strip than they were at the beginning. This technique can be enforced with varying levels of precision. In some stories every minute of screen time is a minute of fictional time. In other stories, such as the daily comic strip For Better or For Worse, each day's strip does not necessarily correspond to a new day of fictional time, but each year of the strip does correspond to one year of fictional time. Real time is ancient in origin, dating back to the climactic structure of classical Greek drama.

In computer science, real-time computing (RTC), or reactive computing, is the study of hardware and software systems that are subject to a "real-time constraint", for example operational deadlines from event to system response. Real-time programs must guarantee response within strict time constraints, often referred to as "deadlines". Real-time responses are often understood to be in the order of milliseconds, and sometimes microseconds. Conversely, a system without real-time facilities, cannot guarantee a response within any timeframe (regardless of actual or expected response times).

A real-time system is one which "controls an environment by receiving data, processing them, and returning the results sufficiently quickly to affect the environment at that time." This usage of "real-time" should not be confused with the two other legitimate uses of the term: in simulation the term means that the simulation's clock runs as fast as a real clock, while in processing and enterprise systems the term is used to mean "without perceivable delay".

A real-time system may be one where its application can be considered (within context) to be mission critical. The anti-lock brakes on a car are a simple example of a real-time computing system: the real-time constraint in this system is the time in which the brakes must be released to prevent the wheel from locking. Real-time computations can be said to have failed if they are not completed before their deadline, where their deadline is relative to an event. A real-time deadline must be met, regardless of system load.